Popular video hosting site Vimeo is now compatible with devices only capable of playing HTML 5 based video like the Apple iPad and iPhone/iPod Touch. Their universal playerâ€ will let users watch videos on any device that supports HTML 5, Flash or native video formats. The player will detect which kind of device being used and will automatically deliver the appropriately compatible video.

Video from Vimeo can be embedded into other sites using special code that one copies and pastes onto their web page. The code will scale to detect new browsers whenever they become compatible with HTML 5  based video. 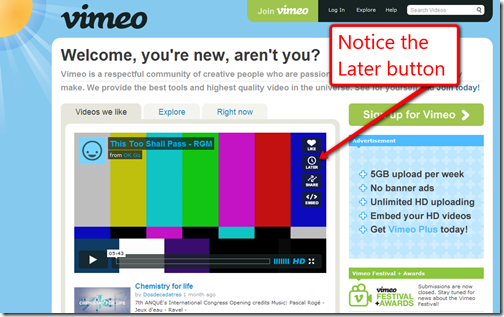 Another new feature being releases is called Watch Later. This one button solution will allow the person viewing the video to choose to instead watch it at a later time. Click the button and it is listed in your Watch Later album on the Vimeo site. This will also be added to the Vimeo API so it can be integrated into developer’s solutions.

Albums from Vimeo Staff on Vimeo.