The Incase Book Jacket Case is a high quality case that not only protects your iPad, but makes it really feel like a book. This case is sturdy and built to las; and with it, my search for the perfect iPad case has never been closer to an end.

I have reviewed others from Waterfield Designs, Speck, Apple, Belkin and even one not intended for the iPad from HP. While those are very good cases, none of them fit with my tastes and how I use my iPad as much as the Book Jacket case from Incase. However, it has one minor flaw, that keeps it from being perfect; but that a slightly more expensive version corrects it.

A good iPad case will protect the iPad, look nice doing it, and fit the iPad and all of its ports, buttons and features.

The iPad fits into the case snuggly, not moving around. This version of the Incase Book Jacket has a flap with Velcro on it to keep the iPad from moving around, something an earlier version was lacking. This strip of velcro is in the center of the case, next to what would be book’s binding if it were a book.

There are roomy cutouts for all the ports, buttons, the mic and speakers. Some cases make it hard to access the volume or orientation lock buttons on the side of the iPad, but the Book Jacket case doesn’t have that problem. The volume buttons are easier to get to than the lock button, but it is not that hard to get at either. 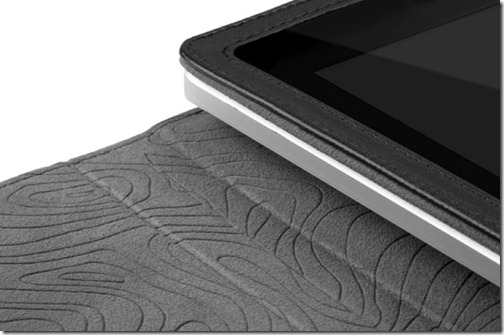 The Book Jacket case also protects the iPad nicely. The part that covers the screen is very firm, feeling like the cover of a hard cover book with a leather finish. The leather is not real leather, but it is is close enough and both looks and feels good. The inside of the front cover is a suede-like material that won’t scratch the screen. When closed, you can take the elastic strap and put it over the front to hold the cover closed while not in use. This way the cover won’t open and accidentally let objects from your book bag or notebook case push in behind the cover to scratch the screen. The elastic is loose enough to be easily removed but tight enough to firmly hold the cover in place.

You can fold the cover back to hold the iPad in one hand. Or you can rest it on a flat surface for a very slight incline while typing. I wish it was designed to give a bigger incline. Incase has another case, the Convertible Book Jacket that is designed to do that for an extra $10, shown below. 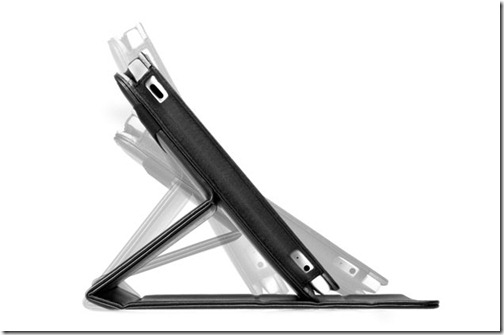 This is an excellent case, but because it lacks a steep enough incline, I wish that I purchased the other Incase iPad case. Additionally, I think the Book Jacket Case is a tad over priced. But despite those two drawbacks, this is the closest to perfect I have come across in an iPad case.