Apple just hit the switch to allow users to update their iPhone’s to version 4.0.1. The .1 denotes a very small change to the OS, so don’t expect anything major, though this update does address the formulaâ€ problem that Apple has blamed for the apparent iPhone reception issues. 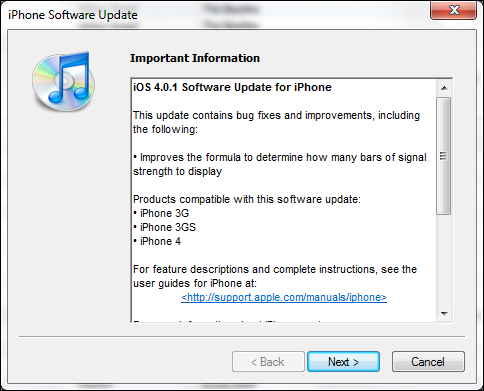 The 4.0.1 update changes the size of the bars to make them more visible, and changes the formula used to calculate how many bars are displayed using some math recommended by AT&T. Engadget has an image showing the difference between the bar sizes:

Here is the exact wording of the update:

Products compatible with this software update:

If you’ve been following the iPhone 4 reception issue debacle, you’ll know that this update isn’t going to fix the issues, as Consumer Reports and many others have confirmed that the issue is hardware related and not a software issue. Apple has called for a press briefing to be held tomorrow at 10am PST in which they are expected to address the issue.

In addition to the iPhone software update, iPad users are now able to update to iOS 3.2.1 which features several bug fixes.

• Addressed an issue that could cause video playback to freeze

• Added Bing as an option for Safari’s search field

Products compatible with this software update:

To get the update, plug your iDevice into your computer, open iTunes, click on your iPad or iPhone and then click “Update” or “Check for Updates”.