iMovie for the iPhone 4: Details and Review 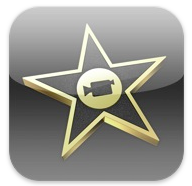 The ability to create and edit HD movies on the iPhone is one of the things that got me most excited about my new handset. Now that I’ve given it a try, I’m amazed at what some have already done with this very limited video editing tool. The reason is that the iMovie app is to movie editing what Windows WordPad is to desktop publishing incredibly basic. The folks at Majek Pictures made a short film called Apple of My Eye on their iPhone. It’s an amazing accomplishment. You can see their video at the end of this review. Now that I’ve tried to create a short video with it, I am amazed at their results. While iMovie is a very limited video editing package, it can do some cool things.

I downloaded iMovie and gave it a quick test. It works for doing very simple edits, but I cannot imagine making a project like Majek’s. The app is a $4.99 app in the iTunes App Store.

iMovie starts with the Theme selection window. It comes with some very basic themes. Sadly, you have to use one of the five. You cannot skip this step. Your next step is to insert some media. 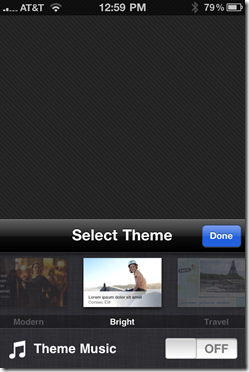 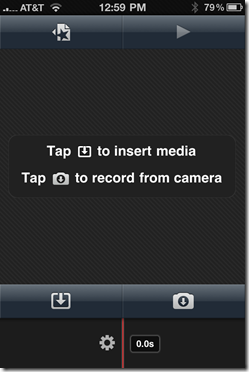 In the above screenshot on the right, you can see two insert buttons at the bottom. The left one inserts media on your phone. You can choose video and pictures from your camera roll or audio from iTunes. Yes, you can include music downloaded from iTunes. That’s something you cannot do with any other app on the iPhone. 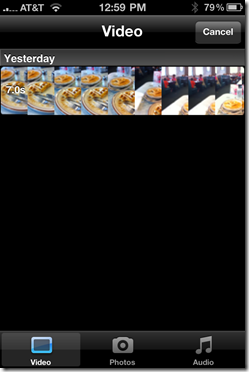 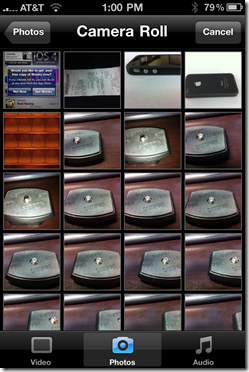 Notice that the video insertion screen takes your video and makes a series of frame thumbnails. This helps you select the right media. My suggestion is to get all your media on the phone before you ever even open iMovie. But if you want to add some pictures or video while in iMovie, choose the insert button on the right (see the screen shot that says tap to insertâ€ above). You can take pictures or video to add to the collection in your project, and it supports shooting in landscape mode. The images and video will also show up in iMovie in landscape mode.

Once you insert media it populates the timeline at the bottom of the screen. 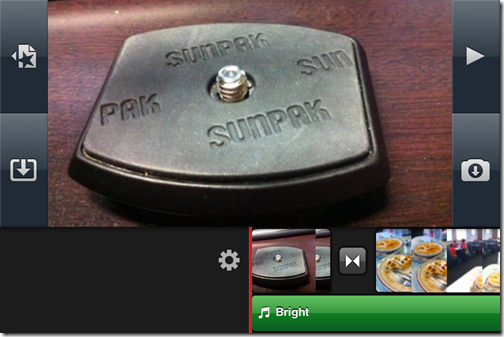 When you are in the editing screen there are four buttons, two each on the sides of the image. We’ve already talked about the insert media buttons (from the camera roll or iTunes on the left side and new media from the camera itself on the right). Here is what the buttons on the top do. The top left button goes back to the project list which gives a thumbnail of each of your movie projects. On the top right is the play button, which plays the project from the current point marked by the red line in the timeline at the bottom. Below on the left is the same screen as above only in portrait mode. 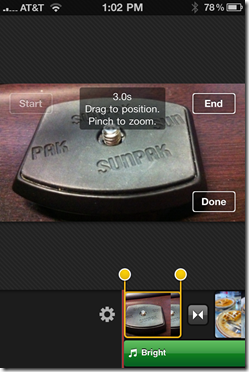 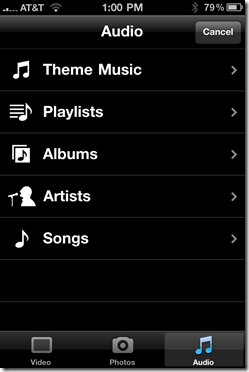 On the right above is the screen where you can insert audio files that are on your device, including content downloaded from iTunes.

The timeline is where all your work is done and the results are shown above it in the preview window. The first little settings icon brings up the theme selection window so you can change your theme and turn the associated music for that theme on or off. Each theme has matching music but you can use your own music or audio too. To do that turn it off there so that you can insert your own audio.

In video editing there is a term for moving back and forth in your video project. It is called scrubbing. With iMovie you do this by simply dragging with your finger on the timeline. As the frames pass under the red line, they are displayed in the preview window. It is very simple to do.

Notice in the left shot above, the little icon with two sideways triangles pointing at one another between the two clips. Each clip is represented by a thumbnail and the double arrow icon shows that there is a transition between them. A transition is the method used to switch from one clip or picture to the next one. Tap it once and the length of the transition shows up in over the frame in the preview window. Tap it twice and you can change the transition style and length. You can choose from having no transition, a cross dissolve where the previous scene fades out as the next fades in, or the theme related transition. This will be different based on theme you choose, but it will be graphical in nature. 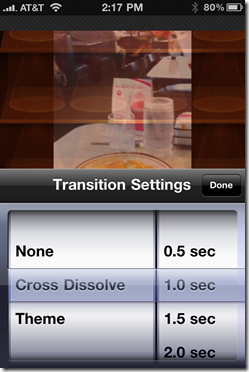 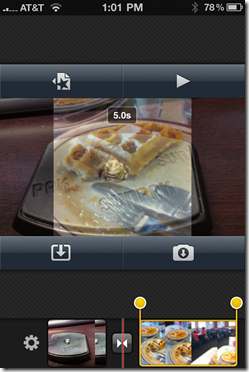 If you double tap on the clip the Clip Settings window moves up from the bottom. You can add a title which will appear over the beginning of the clip. It will be theme styled. You can geotag the clip by tapping location setting and either picking the current location or tap Other and enter the location in the search field that shows up. The last option turns the audio of that scene on or off. There is also a button to delete the clip. The other way to delete is written there below the delete button. It says, Tip: Drag a clip out of the timeline to delete.â€

If you change the title of your movie, the screen below is displayed. It gives you the option to have no title (None”), a title at the Opening of the scene, the Middle of the scene or at the Ending of the scene. There you also type the text. I wish you could split scenes and add text anywhere you like. To do that now you would have to add multiple copies of the video clip and short each one using the yellow circles above. Then add text with the title setting screen. Not ideal, but it is a workaround. 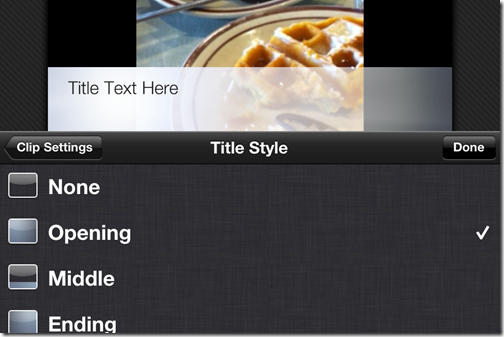 Adding and Working With Still Images

Adding still images to an iMovie project is simple. Once you get them into the project you can do some cool things with them. First set the duration by dragging the yellow circles. Then Tap the image thumbnail in the timeline and you see (below) that you get some new buttons on the screen. First pinch to zoom you picture and use your finger to make position it on the screen. Tap start and that is what the picture will look like at the beginning of the clip. Then re-adjust the image by pinching and then dragging with your finger again. Then tap End and this is where the image will be at the end of the clip. 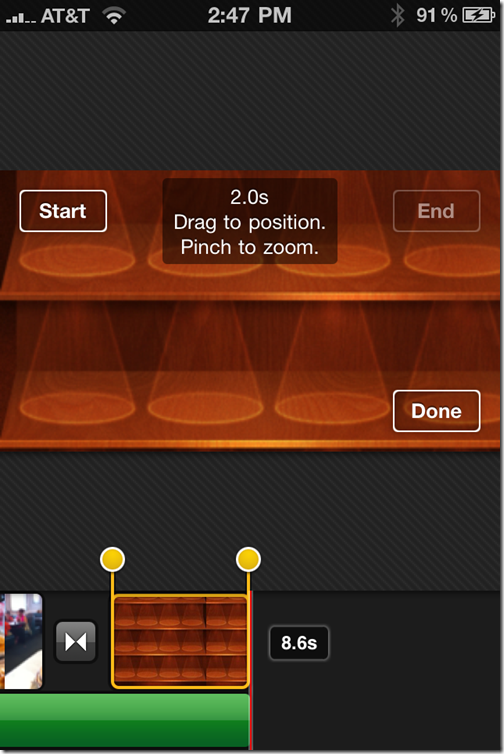 One big annoyance about still images in iMovie; you cannot add titles to them as you would with video clips by double tapping them. Double tap a picture and it shows the same as single tapping.

After you are finished and have added some audio or music, you have the option to export the video.  You do this by going back to the Projects screen (tapping the upper left button) and make sure your chosen Project is active. It will be the only one that is not grayed out. From there you can play it in the iPhone Video player. To do so tap the play button on the bottom center of the toolbar (see left screenshot below). The export button is the lower left button on that toolbar. It brings up the window seen below on the right. The options are to produce Medium, Large and HD quality. Kind of reminds me of the fast food joints that have no small orders of fries anymore. Just medium, large and jumbo! 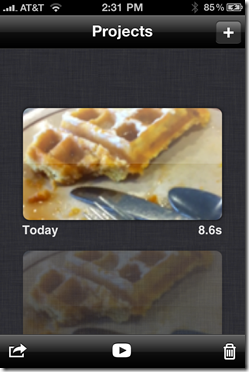 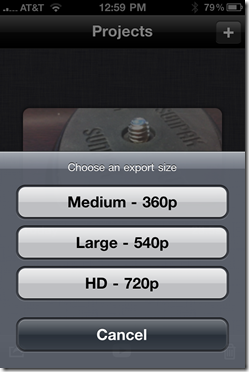 There have been some issues of getting HD video off of the iPhone. Uploading it or sending it via email or MMS causes iOS to down-sample it. So take that in mind when exporting from iMovie. How do you plan to get the video off the iPhone. Once you do export it, the video will show up in your Camera Roll. From there you can email it or send it to someone via MMS. You can also upload it to YouTube. Ben from our Notebooks.com staff has a great tutorial on how to get the video off the iPhone in 720p HD resolution instead of it being down-sampled.

How Good is iMovie?

iMovie is good enough for what it is. If all you want is to combine some videos and pictures with a little audio then it is great. It also suffices for cutting the beginning or ending off some clips. You can add very simple transitions between multiple videos and pictures. If you want more, then you may want to try out an app like ReelDirector or just export your video and edit it on your computer. Remember, if you use iMovie, it’s going to take some getting used to in order to do what the people at Majek Pictures did. Here is there short film:

While I’m nowhere near as talented as the creators of Apple of My Eye, I wanted to give it a try. So here is a short film I put together with iMovie:

I think iMovie is a decent start, but needs some features to become a really good tool. The fact that you can even edit 720p video on your phone is incredible. But we really need a split tool that can cut a clip into two or more parts. It would also be nice if you could add simple headlines without using the built in themes. A simple text title is often best. But it is not possible with iMovie. And why can’t I add text to a picture? That’s a ridiculous limitation that needs to be fixed in version 1.x. Finally, getting your masterpiece off the phone requires tethering to a computer. Otherwise it will be down-sampled to less than 720p.

To make this easier, I would definitely not take the ordinary approach of keeping the camera rolling while you shoot. Do as much editingâ€ as you shoot. Take short clips that will be easy to shorten and manipulate. And make sure you get everything into your phone before starting. You can exit iMovie and it restarts right where you left off. But it will be easier if you have it all collected first. This is good practice for all video projects. But the need is more pronounced on a device like a phone.