Taking the Sprint Overdrive for a Hike 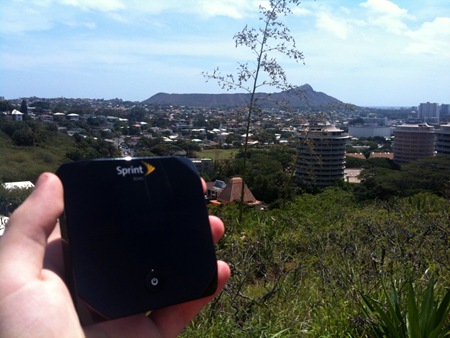 Until quite recently, the only real consumer option for connecting a device to the web while outside of a WiFi hotspot was to purchase a device that had a cellular data modem built right in. This is well and good if you only have one device, but what happens when you end up with multiple mobile devices, but want to get them all online? Until recently, the only option would be to pay for separate contracts for each device’s connection which would be costly and redundant. Enter the mobile hotspot.

Thanks to devices like Sprint’s Overdrive, the multiple device scenario becomes viable. The Overdrive functions just like a little wireless router, except the way that it’s actually accessing the web is through a connection to Sprint’s data network. Because it has the flexibility of being connected to a cellular network, it becomes a tiny portable router which you can use to connect any WiFi device to the web from anywhere that has the appropriate cellular coverage.

What’s particularly exciting about the Overdrive (vs. other mobile hotspots) is that the Overdrive can connect to both 3G and 4G (WiMax) networks. 4G promises speeds that are considerably faster than 3G, but the issue is that 4G network coverage is not yet that widespread. Using the Overdrive, which is capable of connecting to both, is a good way to future-proof. The device can be configured to connect to the faster 4G if it’s available but it’ll fall back to 3G when that’s the only coverage in the area.

To really test the Sprint Overdrive, I decided to take it on a little hike:

The following Speedtest.net results were actually quite bad. At that particular point in time the Overdrive was giving me 1.2 Mbps download and only 0.11 Mbps upload on the 4G network (my iPhone’s 3G generally gives me better results than this). 4G should be much more capable than those figures. I believe that there are some issues with the particular device that I’m testing, and we’re working on getting them resolved. Despite this, there was one point where I was able to hold a real-time video chatting session over Skype without any problems, which is quite impressive and pretty cool when you can video chat from somewhere that you wouldn’t otherwise be able to. Being able to be on the web in this capacity is definitely promising for anyone who relies on the web for their day-to-day productivity. Additionally, the ability to connect multiple devices to the small and portable Overdrive makes cellular data for multiple devices viable.

We’ll be bringing you a more detailed look at the Sprint Overdrive in the near future, stay tuned.