Microsoft took the wrapping off their new mobile phones called KIN One and KIN Two, as in Kinship. They are seen as successors to the Sidekick, cell phones created by Danger which Microsoft acquired. 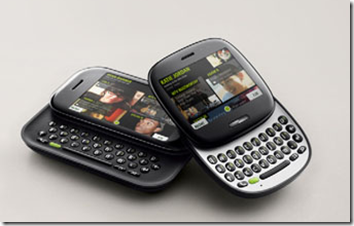 Codenamed ‘Pink’, the two cell phones are being produced by Sharp for the Verizon Wireless network in the US and for Vodafone in the UK . The two phones will be available starting next month.

The KIN One and KIN two both have slide-out, QWERTY keyboards.  All personal content including pictures, video, contacts and messages are automatically backed up online. The backup site is called the KIN Studio. The KIN One and KIN Two are based on the new Windows Phone 7, but will have a very different user interface. Priority number oneâ€ according to Microsoft’s announcement is social networking.

Working closely with our partners, we saw an opportunity to design a mobile experience just for this social generation â€” a phone that makes it easy to share your life moment to moment,â€ said Robbie Bach, president of the entertainment and devices division at Microsoft. We built KIN for people who live to be connected, share, express and relate to their friends and family. This social generation wants and needs more from their phone. KIN is the one place to get the stuff you care about to the people you care about most.â€

Of the two, KIN One is the smaller rounded-square device. It has a 5MP camera with flash for shooting stills and is capable of shooting standard definition video. It comes with 4GB of storage, a mono speaker, and a 320×240 resolution capacitive touchscreen display. The keyboard is smaller and is designed for one-handed use. 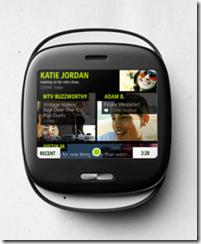 The KIN Two has the more advanced features than the KIN One. It comes with a higher resolution camera (8MP and HD video) and screen (480×320 pixels). It also has double the storage and stereo speakers. Its wider landscape design is intended for two-handed thumb typing.

The interface of the KIN phones begins with the home screen dubbed the KIN Loop. From there you access all your social networking information from your social networking sites. The Loop also helps the user share their content with their friends and family via the Spot. The Spot lets them focus first on the people and stuff they want to share rather than the specific application they want to use. Videos, photos, text messages, Web pages, location and status updates are shared by simply dragging them to a single place on the phone called the Spot. Once all the people and content are in the Spot to share, the consumer can choose how to share, and start broadcastingâ€ to Facebook or via e-mail and MMS.

Content from the phone is backed up online and sharable with others. Storage is unlimited and can be accessed via any Mac or PC computer through a Silverlight application.

In light of the app-centric devices like the iPhone and Android smartphones, it is curious that Microsoft has left out the ability to run apps from an app store. You will be able to do this on phones running Windows Phone 7 when it is finally released this fall. There will also be no calendar on the KIN. The thinking must be that the target audience, younger consumers, do not really need a calendar. Finally, there will be no instant messaging. Microsoft doesn’t think their text-loving users will care.