Scrabble and Apple Collaborate on Genius

The launch of the iPad has been hyped about as much as anyone can hype something. I’d like to add to that hype. 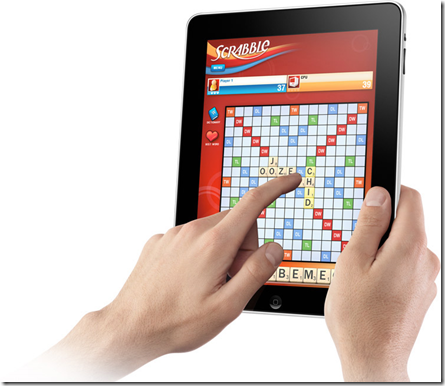 One of the Apps for iPadâ€ that was launched and downloaded by many this weekend was the Scrabble app by Electronic Arts. If you like Scrabble, it looks compelling. I don’t. But I see the value in not having to play with tiny tile pieces or adding up a triple word score under foxâ€ in the center of the board. Not worrying about scattering tiles, especially when you are on the go, is nice. But this scrabble app does more; it lets you combine your iPad with a helper app on an iPhone or iPod Touch that takes the place of the Scrabble wooden tray 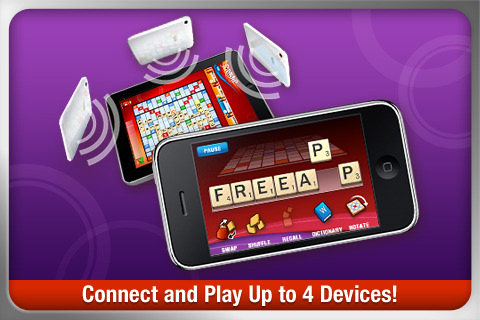 The app for the iPhone is free and makes a wonderful companion for Scrabble fans with iPads. Check out the cool video from Engadget to see how it works.

Up to this point one cannot claim this is Genius. Inventive and creative? Yes! But far from genius.

What makes this genius is the possibilities for other applications. Games would be fun, but what if you are working on a group project like a document, picture or video; the iPad could hold the group space content and the iPhone’s could hold the individual content. So if Joe is designing a floor plan for that new factory on a sketch pad on the iPad, Jane and Bill can manipulate the content on the helper app with their iPod. Or that long document being edited could be spell checked via an iPhone meanwhile another person with their iPhone is going through the document and looking for key words to tag. These ideas are just the beginning; I’m sure people who are in the business world will come up with much better ideas than I.

I see even more possibilities in the area of education. Teachers could plug their iPad into a projector or large display in the classroom. Students who have an iPhone or iPod Touch could have a kind of answer pad for answering questions and scoring the questions instantly with feedback on the screen. Kids who don’t have the courage to speak up in class are suddenly able to take part in a meaningful and encouraging way. Suddenly, the 100 person lecture hall is not as scary to the introvert.

As a minister I would love to have this functionality built into a Bible program where I could be teaching on a passage using the Bible on my iPad while class members are viewing the outline of the study or notes on their device. They could post or textâ€ questions to me while I’m speaking. I could answer these inquiries during the course of the presentation, instead of later at the exit as happens now. Therapists could do the same as they interview patients giving them a chance to view and respond to digital inkblots. We already are seeing where people are using the iPhone as remote control systems for home automation or computer based presentations or to manipulate media players. The same could be true of the iPad/iPhone combination.

The possibilities are endless. The connection between the larger display of the iPad and the smaller, more personal aspect of the iPhone, make this a combination platform for anything where people would want to interact with content and collaborate to get work or play done. It offers them interactivity in an unthreatening way.