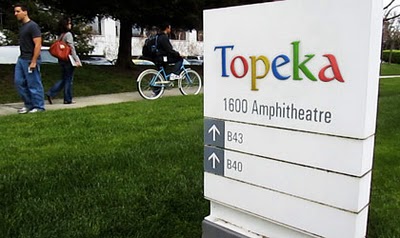 I dont know.  I dont think it will stick.  I mean the phrase “I need to Topeka for it” just doest roll off the tongue.

From the Google Blog, here is the story:

Early last month the mayor of Topeka, Kansas stunned the world by announcing that his city was changing its name to Google. We’ve been wondering ever since how best to honor that moving gesture. Today we are pleased to announce that as of 1AM (Central Daylight Time) April 1st, Google has officially changed our name to Topeka.

We didn’t reach this decision lightly; after all, we had a fair amount of brand equity tied up in our old name. But the more we surfed around (the former) Topeka’s municipal website, the more kinship we felt with this fine city at the edge of the Great Plains.

HAPPY APRIL FOOLS DAY everyone from Google and us at Notebooks.com!