When NVIDIA went to a driver model that allowed consumers to update their notebook graphics drivers direct from NVIDIA, we enabled millions of notebook users to enjoy the benefits of our CUDA parallel computing architecture. One application that was released today that is a great example of how CUDA makes life better is vReveal from MotionDSP.

If you have a digital camera or one of those cool “Flip” cameras, your notebook is probably full of photos and videos you’ve taken. Photos are easy to touch up and share, but do you ever wish you could do the same to your videos? Today, one of NVIDIA’s partners, MotionDSP, released a revolutionary CUDA-powered video application you should definitely check out. MotionDSP is well known for their high-end “CSI-Style” forensic video software, which, if you read their website carefully, was funded by InQTel, the venture arm of the US Intelligence Agencies — yes, the three-letter agencies.

vReveal is a Windows-based video enhancement application you can download from NVIDIA’s NZone site. It can dramatically improve the quality of flawed videos with just one click. The unrivaled enhancement technology powering vReveal works wonders with videos that are shaky, dark, noisy, pixelated, or blurry. With vReveal, you can play video files, preview enhancements to videos, and then save enhanced videos to disk or upload them directly to YouTube. vReveal even offers low-light correction and image stabilization that does a better job than tools costing 10 times more.

vReveal is the only consumer software that enhances video with genuine super-resolution technology. It uses patented algorithms to analyze and extract information from multiple frames to reconstruct single, enhanced frame. vReveal has the unique ability to increase resolution and remove noise in all your videos. 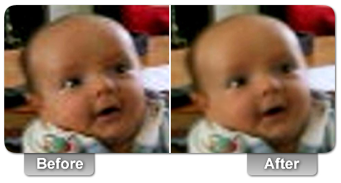 vReveal runs up to five times faster on CUDA-enabled NVIDIA graphics processors. That means you can process video enhancements in less time and have your CPU available for normal everyday tasks like emailing and internet browsing. The chart below compares the performance of the CPU with some of our desktop GPUs.

The more CUDA-cores you have, the faster vReveal runs, so it really shines on the new 200-series notebook GPUs we announced last month. And, as you can see from the benchmark chart below, it scales right down to our ION chipset, putting the Atom processor to shame.

How CUDA helps: CUDA allows vReveal to shift the video processing to the GPU, leveraging the power in your notebook GPU for faster speed. And the speed difference is huge: up to 5x faster — even on the NVIDIA ION platform. 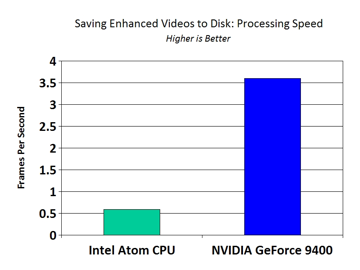 Why does vReveal run so much faster? NVIDIA’s new notebook chips like the GeForce GTX 280M have as many as 128 CUDA-cores, which work in parallel in apps like vReveal to process your video through many processing pathways. Your CPU, on the other hand, typically has two cores, which can only run sequential tasks. Netbook CPUs can have only a single core. They just can’t process huge amounts of data, like video, as quickly.

What this means to you is: if you run vReveal on a notebook with an NVIDIA GPU (as opposed to a CPU), you save a ton of time. Touching up your videos and pushing them to YouTube can literally save HOURS.

You can download a 30-day trial of vReveal from NZone and learn more about on the vReveal website.