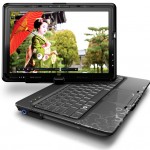 The TouchSmart tx2 is an improvement over HP’s previous tablet, the Pavilion tx2500z. The tx2500z does include a touchscreen, but you can only use one finger at time. The new capacitive touch is a really big deal and if you’re considering a tx-series tablet you should ignore the tx2500z, which is still being offered by retailers and on HP’s Web site, and opt for the tx2.

Check out the below HP promo video to get a sense of what multi-touch means. If you’re an iPod Touch/iPhone owner you’ll feel right at home with the tx2. While in tablet mode you can write on the tx2’s display with the included digitizer. 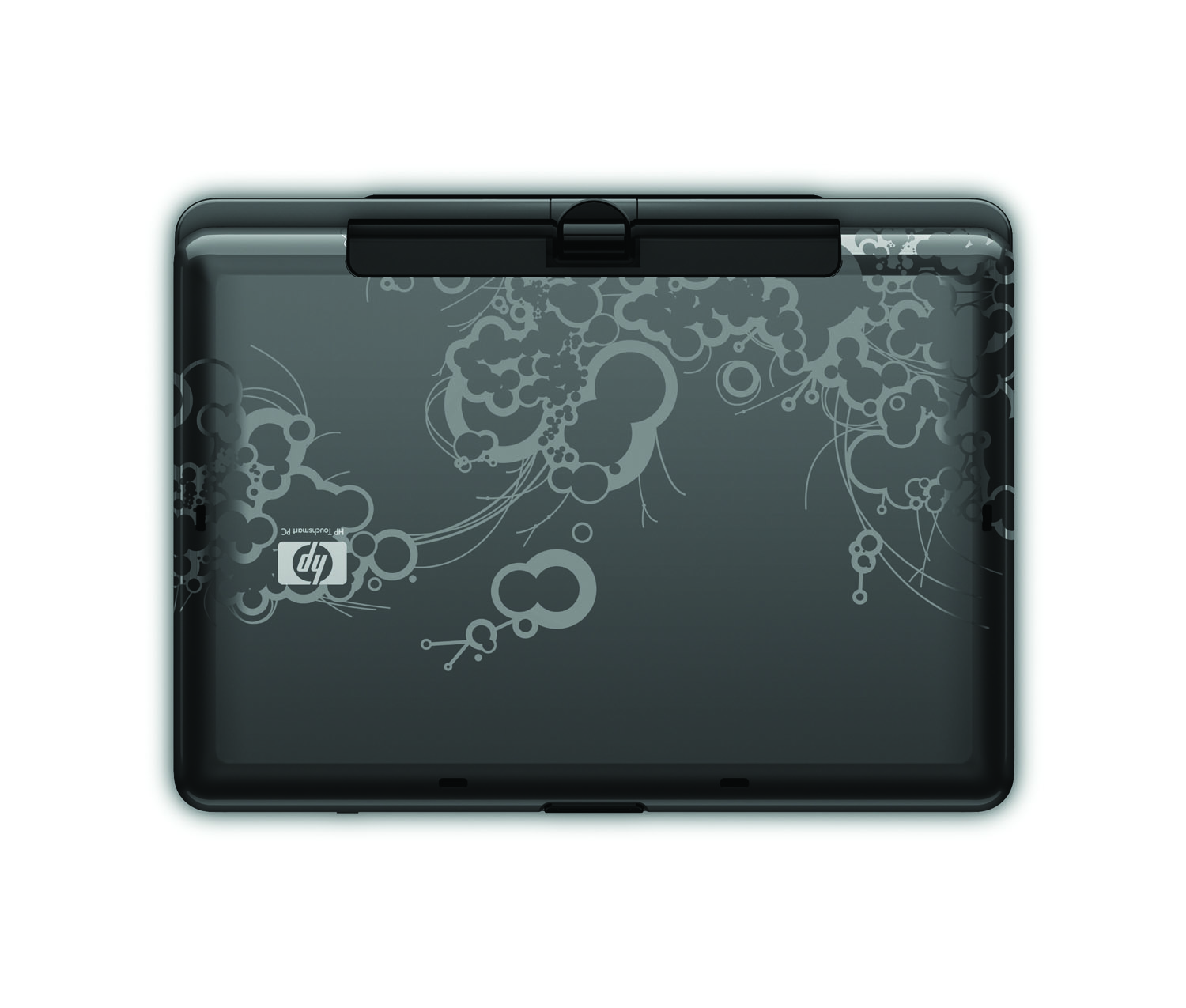 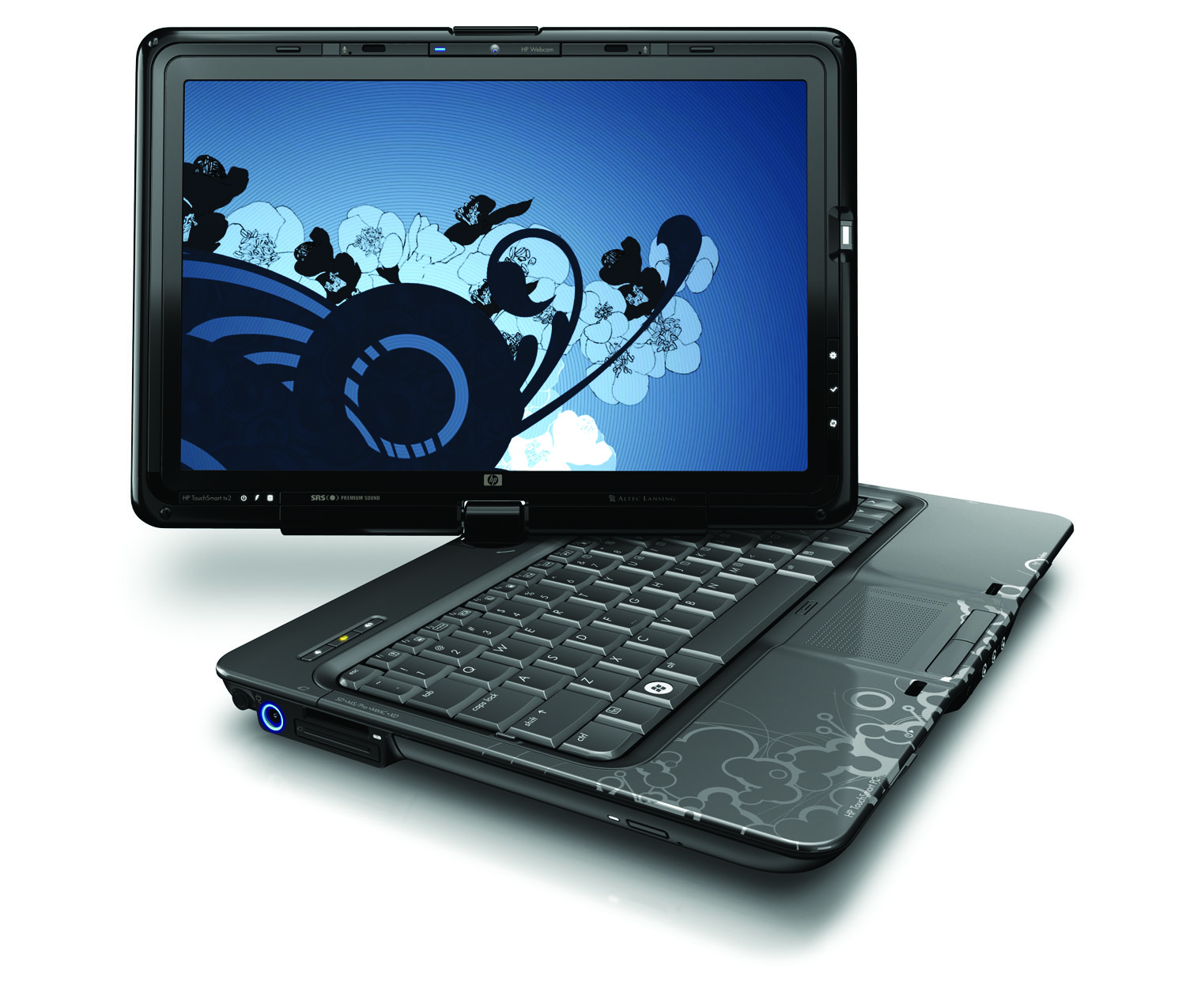 The TouchSmart tx2’s interface is similar to the HP’s desktop TouchSmarts that I first played with back in June. I wondered when we’d see it on a tablet and am really happy that HP’s offering similar features in a mobile package.

I recommend the TouchSmart x2 as long as you’re certain you’ll use the tablet and touchscreen functionality. If you don’t plan on using the digitizer on a regular basis I recommend looking at a traditional notebook.

The Touchsmart TX2’s 12.1-inch display (1280×800 pixels) is on the small side and I recommend using an external display if you’re going to use it for a long period of time. HP does sell several port replicators and docking solutions that are compatible with the TX2.

The display swivels 180-degrees and can fold down into tablet mode, making it easier to use with the digitizer and while standing.

HP TouchSmart TX2 has a starting weight of 4.33 pounds with a standard 4-cell battery and the plastic weightsaver in place of the DVD/RW drive.

HP’s standard configuration for the TX2 seems to include a 6-cell battery, which will add a few ounces to the equation, but the extra juice is well worth it. The TX2 shares many of the same components with the tx2xxx series and battery life has been less than impressive on this series. When I carry my tx2000z I always carry an extra battery.

The TouchSmart TX2 comes with 3GB RAM standard, which is the most 32-bit Vista will recognize. If you opt the 64-bit version of Vista you can go nuts and order 8GB of memory for $725. Obviously loading up a $1,149 notebook with $725 worth of RAM doesn’t make a whole lot of sense. The $75 4GB option is more than adequate.

TURES MULTIMEDIA DRIVE OPTIONAL ACCESSORIES WARRANTY AND SUPPORT • See product catalog • Limited 1-year and 90-day warranty options available, depending on country • 1-year limited warranty on primary battery SOFTWARE SECURITY AND SUPPORT • • • • • • • Symantec Norton Internet Security (60 Day trial) (18) Digital Persona Software (Available with Digital Fingerprint Reader configuration only) HP Help and Support HP PC Recovery HP Total Care Setup HP Total Care Advisor DISPLAY NETWORK CARD WIRELESS OPTION • 12.1-inch diagonal WXGA (1280 x 800), Integrated touch-screen, Convertible display • Integrated 10/10/1000 Gigabit Ethernet LAN(13) (RJ-45 connector) • • • • 802.11b/g WLAN OR, 802.11b/g WLAN and Bluetooth(15) OR, Wireless 802.11a/b/g/n WLAN(14) OR, Wireless 802.11a/b/g/n with Bluetooth(14) (15) AUDIO KEYBOARD POINTING DEVICE PC CARD SLOTS • Altec Lansing • 101-key compatible and 3 Quick Launch Buttons • Touch-screen for finger input with multi-touch support • Digital ink pen for handwriting and drawing on the screen • 1 ExpressCard/34 slot PRODUCTIVITY AND • Microsoft Works 9.0 FINANCE • Microsoft Office OneNote • Microsoft Office 2007 Home and Student Edition(17) (60 Day Trial) MULTIMEDIA • • • • • MediaSmart 2.0 HP Games powered by Wild Tangent with Spore Creator Muvee Reveal Corel Painter Essentials 3.0 Sling Media Player VISIT WWW.HP.COM FOR MORE DETAILS! (1) Certain Windows Vista product features require advanced or additional hardware. See www.microsoft.com/windowsvista/getready/hardwarereqs.mspx and www.microsoft.com/windowsvista/getready/capable.mspx for details. Windows Vista Upgrade Advisor can help you determine which features of Windows Vista will run on your computer. To download the tool, visit www.windowsvista.com/upgradeadvisor. Note: List represents minimum port configuration; additional parts may be available on selected configurations. 1. Not all Windows Vista features are available for use on all Windows Vista capable PCs. All Windows Vista capable PCs will run the core experiences of Windows Vista, such as innovations in organizing and finding information, security and reliability. Some features available in premium editions of Windows Vistaâ€”like the new Windows Aeroâ„¢ interfaceâ€”require advanced or additional hardware. Check www.windowsvista.com/getready for details. 2. Up to 9GB of hard drive is reserved for the system recovery software. 3. AMD’s numbering is not a measurement of clock speed. 4. This system requires a separately purchased 64-bit operating system and 64-bit software products to take advantage of the 64-bit processing capabilities of the AMD 64 processor. Dual/quad/triple-core processing available with AMD technology is designed to improve performance of this system. Given the wide range of software applications available, performance of a system including a 64-bit operating system will vary. 5. Speeds listed for AMD Athlon 64 Processors are maximum performance levels on AC power. The processor is reduced up to approximately 50% on battery power to optimize battery life. Please go to www.hp.com for more details on battery life conservation. 6. Dual core/Triple core/Quad core is a new technology designed to improve performance of certain software products. Not all customers or software applications will necessarily benefit from use of this technology. 7. Actual bus speed is less. Listed bus speed represents the equivalent effective throughput for data. 8. For hard drives, 1 GB= 1 billion bytes. Actual formatted capacity is less. 9. Shared video memory (UMA) uses part of the overall system memory for video performance. System memory dedicated to video performance is not available for use by other programs. 10. Double Layer discs can store more data than single layer discs. However, double-layer discs burned with this drive may not be compatible with many existing single-layer DVD drives and players. 11. Actual speeds may vary. Do not copy copyright-protected materials. 12. Actual speeds may vary. Don’t copy copyright-protected materials. Double layer discs can store more data than single layer discs. Discs burned with this drive may not be compatible with many existing single-layer DVD drives and players. LightScribe creates a monochrome image. LightScribe media sold separately. 13. Actual data transfer rates will vary. 14. The specifications for the 802.11n WLAN are draft specifications and are not final. If the final specifications differ from the draft specifications, it may affect the ability of the notebook to communicate with other 802.11n WLAN devices. 15. Bluetooth is a trademark owned by its proprietor and used by the Hewlett-Packard Company under license. 16. Weight will vary by configuration. 17. The Microsoft® Office Home and Student Edition 2007 is a trial version; functionality is reduced after 60 days. The full version is sold separately. 18. Internet access required. First 60 days included. Subscription required for live updates afterwards. 19. Games may be limited during the trial period. Full version games may be purchased at any time. Internet access required and sold separately. Actual product may vary from image shown on datasheet. ©2009 Hewlett-Packard Development Company, L.P. The information contained herein is subject to change without notice. The only warranties for HP products and services are set forth in the express warranty statements accompanying such products and services. Nothing shall be construed as constituting an additional warranty. HP shall not be liable for technical or editorial errors or omissions contained herein. 11 13 08 d1 rk Product Number: PR Datasheet