HP unveiled a group of newly updated machines including an updated HP Chromebook 11 that looks more like the larger popular HP Chromebook 14, which still reigns as the best Chromebook money can buy. They also launched a colorful HP Slatebook, a black and yellow Android-powered notebook computer. Add to that a few new convertible HP Windows 8.1 notebooks that will function as both laptops and tablets. One detaches from the keyboard while the other two come with a screens that fold back all the way to give users a tablet experience, much like their old HP TX line of convertible machines.

HP announced these machines as “back-to-school” computers. That signals potential buyers that these won’t come with high-powered specs to run the latest games or hardcore applications. However, they offers some interesting options. 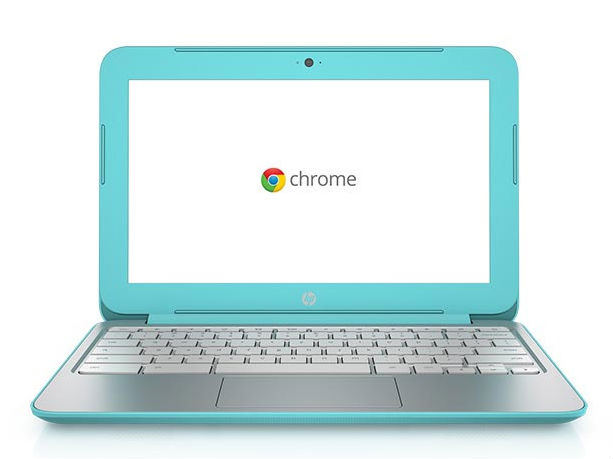 The lowest priced model updates the HP Chromebook 11, which came with a great screen and charged via a universal micro-USB cable. However, it looked different from the Chromebook 14, a larger Chromebook with a 14-inch screen instead of the 11.6 that comes on the smaller laptop. HP updated the look of the Chromebook 11 to match the 14. The chassis sports a silver trackpad and platform around the keyboard area. The keys are white. The bezel and outside covers come in two colors. The Ocean Turquoise seen above matches the color available on the HP Chromebook 14 just like the Snow White, which looks nicer and less garish. They didn’t bring the bright reddish pink color over from the 14.

The machine will ship with a 1366×768 resolution screen, a 1.7GHz Samsung Exynos 5250 processor, 3GB of RAM and 16GB. HP offers 100GB of Google Drive storage for 2 years free for first time Chromebook buyers. To access the storage and other webapps that run on ChromeOS, users can connect via 802.11 a/b/g/n Wi-Fi or optional 3G/4G. That wireless data connections comes with 200MB/month free from T-Mobile on the HP Chromebook 14. We expect that to also be the case on these models, although users can put an AT&T SIM in the slot to run on their more readily available network. We won’t get the same battery life as we did on the earlier model since it’s rated to last only 6.5 hours compared to the 14-inch battery life promised to last around 9 hours. 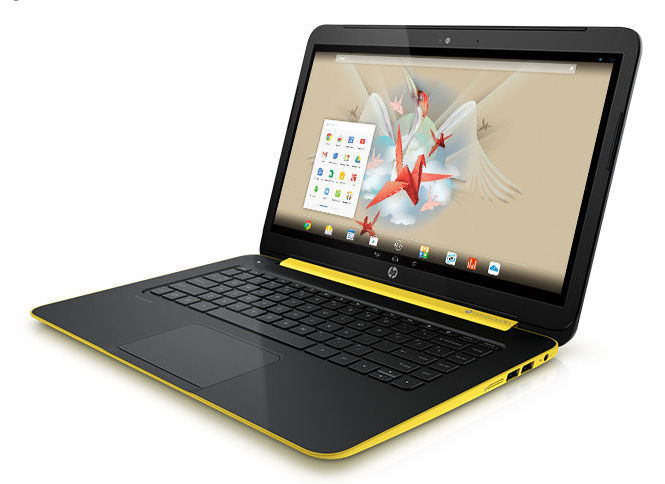 The new Android-powered HP Slatebook comes with a black design and bright yellow accents around the edges and the hinge. Since it runs Android, the computer will give users access to all the great apps available in the Android Google Play Store. The computer ships with 64GB of storage built-in plus a micro-SD card slot for additional storage.

The machine shows off those apps using a 14-inch touchscreen display powered by GeForce graphics. The screen’s 1920×1080 resolution gives us a high-resolution with full 1080p ability for watching HD movies. Two gigabytes of RAM and an NVIDIA Tegra 4 mobile processor come together with over 9.25 hours of battery life. That’s decent set of specs for an Android machine.

Users can hook up peripherals via two USB ports. They could be USB 2.o or 3.o, but HP’s not saying. HP adds an HDMI port for hooking up to an external display for doing presentations or watching video. The port will possibly push a 4K display with a resolution that’s four times that of 1080p.

This machine gives Android lovers a third option to add  to their phone and tablets. Imagine working on a phone while out and about, and then switching over to a tablet around the house. When hardcore work needs to get done, pull out this HP Slatebook to finish up all on the same operating system.

The HP Envy x360 lets users work with the machine as a tablet, a desktop touchscreen computer and a laptop.

HP showed off three other notebooks that give users a convertible laptop and/or tablet experience. The first design includes a pair of 360-degree convertible notebooks that let the user fold the display back so they can pick it up like a tablet. Each of these run Windows 8.1. The HP Envy x360 and the HP Pavilion x360 come with swivel hinges that fold back all the way. The user can pick up the machine and hold it like a tablet, prop the computer up in a tent-like position to use it as a touchscreen computer, or keep it in a traditional alignment like a laptop.

The HP Pavilion x360 comes with a 13.3-inch display and hinge that lets the user fold it all the way back.

The difference between the Envy x360 and the Pavilion x360 starts with the screen size. The Envy sports a larger 15.6-inch display while the Pavilion uses a smaller 13.3-inch display. The larger model will cost $680 with a Core iX processor and ships June 11. The smaller computer costs $600 with an Intel Core i3 and for $630 an AMD A8 model will ship on July 20. 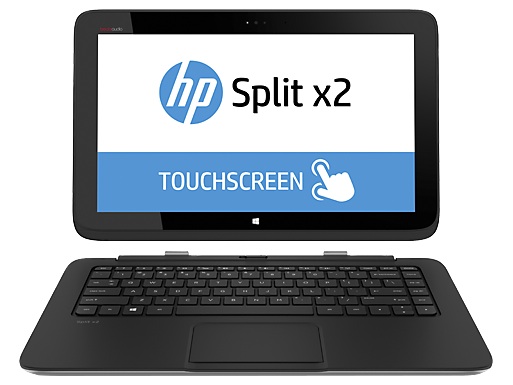 The HP Slpit x2 gives users a detachable Windows 8.1 tablet or they can use it as a laptop with extra long battery life.

A third machine coming June 29, called the HP Split x2 will let users detach the 13.3-inch touchscreen display so they can use it as a traditional laptop or as a large touchscreen tablet. Since it comes with an extra battery in the keyboard, it gets incredibly long life in laptop mode. It will cost $600 and ship starting June 29.