If you thought a two screen laptop was impressive then the Intel prototype laptop with 4 screens code named Tangent Bay is poised to blow you away. Instead of sliding, folding or otherwise adding to the width of your laptop the prototype integrates 3 OLED Touch Screens above the keyboard which can be used to control the computer and display media.

The Crave blog lives up to its name making me crave this concept laptop already. In the demo given by Intel the extra displays can be seen shuffling through music and editing a playlist on the screens. An additional video shows the lower screens used to control on screen video and flip it between screens.  Crave also noted that you can, “also contract, zoom, scroll, and pan content from one screen to another.” 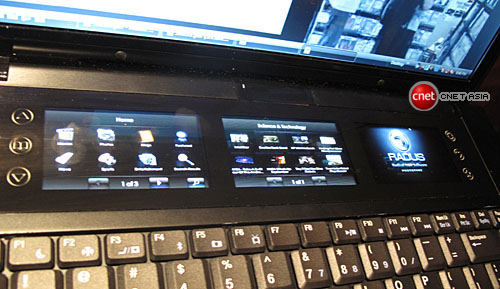 Unlike the other multi display laptops that are out or coming soon, and are aimed at professionals who need two screens, this concept appears to have a more widespread appeal; letting users do more with their media. This focus on media and the ease of sharing items between screens could prove to make this concept a much sought after model.

The left-most OLED screen looks like it contains shortcuts to often used programs and other handy links. The implementation reminds me of the Optimus Keyboard which is cool but also expensive and more limited than a notebook with 3 touch screens.

So what do you think? Are the 3 extra screens useful or is it just another gimmick?

Update: Here’s a video of the Intel prototype that Xavier shot at Demo from IDF 2009: