MacPhun software broke away from its whimsical name to enter the serious photo editing realm producing an awesome plugin or stand alone photo tuner called Intensify Pro. With Intensify Pro professional photographers, serious enthusiasts and even those who just enjoy taking photos without taking themselves too seriously, can get great results thanks to Intensify Pro. We love this app and recommend it without reservation. Here’s why we’re so keen on Intensify Pro.

MacPhun seemed more like a software maker for the average consumer who liked taking snapshots. Intensify Pro spans the spectrum of snapshot shooters to serious enthusiast and even pros. The software runs as a standalone photo editor or within Apple Aperture, Adobe Photoshop, Photoshop Elements and Lightroom. We used it primarily in Aperture as a plugin. Open the plugin by clicking on Photos in the menu and then click on Edit with Plug-in and then Intensify Pro.

To open in Lightroom, Elements or Photoshop using whatever method those applications offer for accessing plugins.

Users can also open the program as a standalone app on the Mac. The app opens and a Finder dialog box asking to open a file. 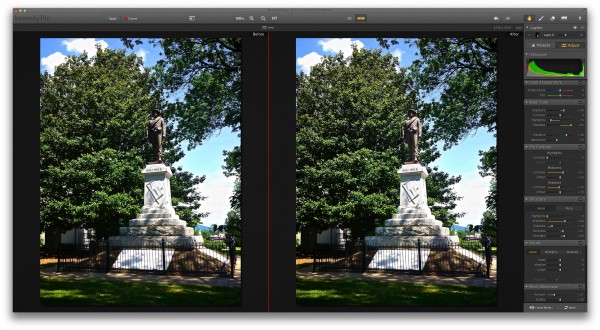 We don’t have room here to offer a full tutorial because the app offers so much. Above notice the before and after feature that lets users quickly see how edits affect the look of the photo.

Start with a Preset in the bar that sits at the right side of the screen. Notice below the nice black and white preset. We chose Dramatic 2 and it produced an attractive image of the statue in our town’s square.

Once a user starts with a present, they can tweak it using the Adjust button to the right of the Preset name. Notice below that Intensify Pro allows for creating layers, useful for editing an image without touching the original. It also shows the histogram, a graph the photographer many pixels in each levels of brightness from black on the left, middle level in the center and white pixels on the right. Finally, each adjustment slider shows how much the user changed that setting from the original using a yellow indicator on the slider line. If a slider shows yellow, then this indicates that the slider moved from the original spot when the user first opened the photo. That’s a nice touch we’d like to see in other photo apps. 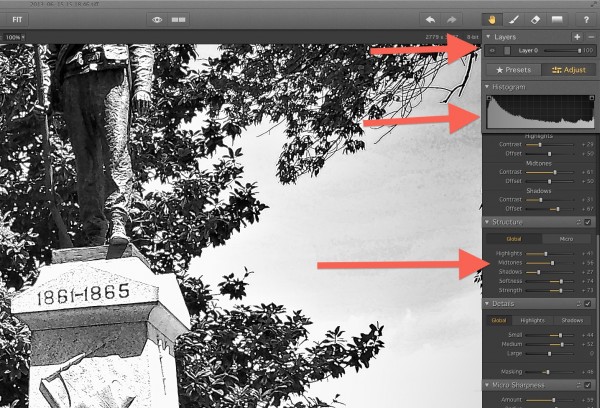 Intensify comes in two forms, one for the average user for $29 called Intensify. The Intensify Pro app/plugin costs $59. The pro version adds …

We love Intensify Pro and it now fits in our regular workflow when editing photos. We get some pro level editing like Structure, Details, Pro-level contrast settings, Micro-sharpness, Layers and Masking. The presets look better than anything from simple apps like Instagram on mobile devices. We actually use them to create attractive results.