The MacBook Air tear drop, or wedge shape is iconic to the Apple brand, but that hasn’t stopped competitors from producing similar looking notebooks.

Many of the Early Ultrabooks, like the Asus Zenbook models look very much like the MacBook Air in design.

That may soon come to an end as the U.S. Patent Office awarded Apple a patent for the teardrop design of the MacBook Air. The Verge discovered Apple Design Patent No. D661,296, which includes a number of illustrations supporting Apple’s claims. 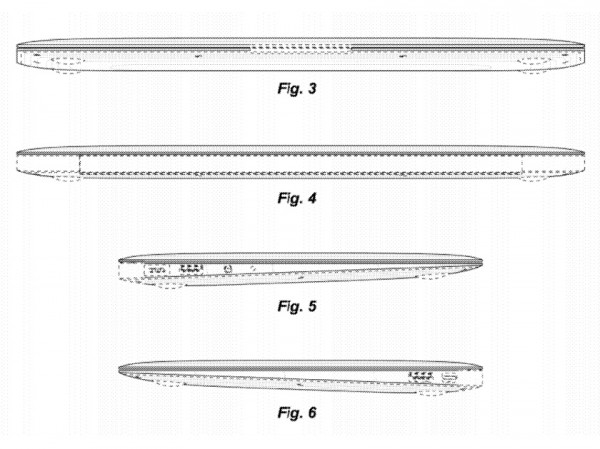 The patent gives Apple a better legal standing if it wants to stop the Ultrabook revolution with legla maneuvering, much like it has stymied HTC and Samsung in the smartphone and tablet space.

It is unfortunate that Apple has earned a patent for a design which Apple’s senior vice president of Industrial Design calls “inevitable“. Jonathan Ive further described the Apple design to The Telegraph recently saying it’s, “the only possible solution that makes sense.”

This is similar to the how Stacy Wolff, HP’s vice president of industrial design responded to criticism that the HP ENVY Spectre XT looked a lot like the MacBook Air. Wolffe told Engadget, “The thing is that you have to design what’s right, and that is that sometimes the wedge is the right solution, silver is the right solution.”

For years notebooks looked like the same rectangular box with sharp corners, and now that every manufacturer must focus on the design of at least one notebook model we’re seeing a new “same” look.

Here’s a look at the HP ENvy Spectre XT, which some might say looks like the MacBook Air.