Lenovo is most often known for their ThinkPad business systems, but the company also offers a number of systems aimed at the education market, like the ThinkPad X130E.

The X130E is a much tougher model of the ThinkPad X120E which I reviewed last year, and is well equipped to handle the hazards of the classroom. While it isn’t rated for it, I could probably drive my car over it and it would keep working.

The portable form factor, incredibly durable build and excellent keyboard pair up with an all day battery to deliver a well equipped solution for the education market.

So far, my only complaint about the system is the very touchy and small touchpad, but an external mouse or smaller fingers will help with that.

The ThinkPad X130E I have in for testing uses an AMD E 300 1.3GHz processor, 2GB RAM and has an 11.6 inch display with a 1366×768 resolution. You might think that this system is underpowered, but I didn’t find it sluggish while going about the tasks I would expect students to be doing such as web browsing, note taking, flash heavy websites and running multiple programs at once.

I’ll get into all the features in a second, but as soon as I picked up the X130E I knew it was a well built notebook. Everything about this device feels durable and well built. Even when I tried to flex the base or lid, I came up with white knuckles instead of buckling plastic.

I haven’t given the notebook a proper battery test yet, which will simulate web browsing until the battery dies, but during my daily use I found that it was easy to get 5 to 6 hours of battery life without worrying about screen brightness. I wouldn’t be surprised if this notebook can last the full schoolday with the 6 cell battery.

As I mentioned, the keyboard is rock solid and perfectly sized for students and teachers. The touchpad is a bit small, and it takes some getting used to. So far it is touchy, even though it is a newer clickpad style touchpad.

The ThinkPad X130E is ready for the hands of schoolkids everywhere thanks to a rugged design and the reinforcement of potential break points. Lenovo has also included security features and customization options that schools will appreciate.

After spending a week with the ThinkPad X130, I can attest to the build quality of the notebook. These design features are more than bullet points on a sales sheet.

The keyboard on this notebook is great, not the best ThinkPad keyboard I have used, but pretty close. It certainly blows away consumer notebook keyboards. This island style of keyboard means that the students won’t be able to pull keys off, at least not without a screwdriver and lots of leverage. 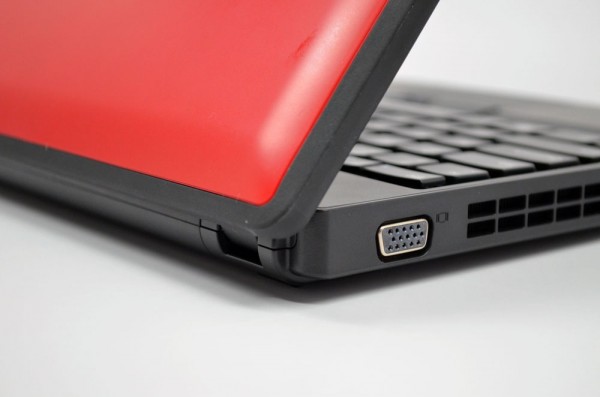 Hinges are tested to withstand heavy use.

Lenovo also made the entire system more rugged, starting with the cover and corners. The corners on the X130 are 33% stronger than the x120E and include rubber bumpers to cope with bumps and drops.

The display bezel is thicker, to protect the display from damage while in transport and the hings have been designed to last 30,000 cycles, or 100 times a day. The ports on the notebook include all of those education environments need including Ethernet and HDMI. The ports are recessed, and Lenovo has made the Ethernet port stronger to prevent damage if a pupil pulls the cord out without pressing down on the tab.

The ThinkPad X130E has recessed ports and a stronger Ethernet port.

Administrators will enjoy the security features including TPM, Intel Anti-Theft (only on the higher end model) and a hard drive retention program that lets the user keep drives that fail under warranty so that IT can dispose of data themselves.

Stay Tuned for our full review of the ThinkPad X130E.