We’ve seen ASUS’ ultrabooks before, but today the company officially announced the notebooks and revealed their product name: Zenbook. The two models — the 11.6-inch UX21 and 13-inch UX31 — are essentially the same computer in two ultraportable sizes. An embodiment of “the Ultrabook vision” set forth by Intel, these skinny notebooks are coming for the MacBook Air hardcore. 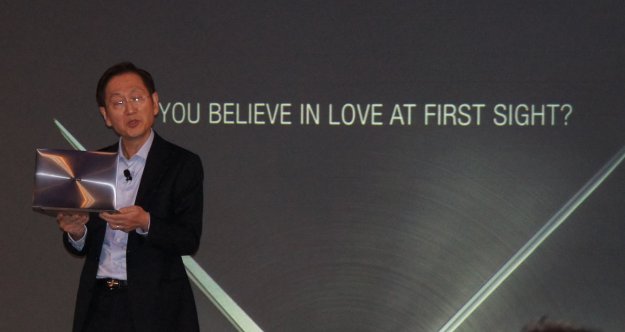 According to ASUS chairman Jonney Shih, the Zenbook embodies the same ideals as Zen philosophy and is the “perfect fusion of beauty and strength and harmony.” It’s a beautiful machine, no doubt. I especially like the spun metal look on the cover. Plus both models are really light and have gorgeous displays. 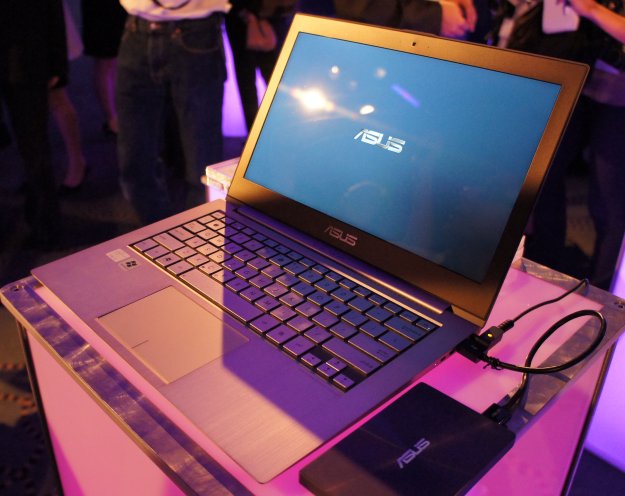 Inside the Zenbooks will come with second generation Intel Core i5 and i7 processors (ultra low voltage models), SSDs, and USB 3.0 ports. The solid state drives are part of what makes the Zenbooks so fast and able to resume from sleep in 2 seconds. Coupled with the company’s Super Hybrid Engine II technology.

ASUS claims that the 2 second resume won’t balloon to 6 seconds after several hours. No, the Zenbook will always have a 2 second resume and still maintain a 2 week standby time. If the system senses that the battery is down to 5%, it will backup the data in case of total power loss. I suspect what they mean is that it will do the Hybrid sleep thing, which flashes an image of the data, programs, etc. running when you last closed the lid.

Not only should you expect long battery life from the Zenbook, but battery longevity. The Super Hybrid Engine is designed to extend the battery’s life by 25%.

Chairman Shih compared the Zenbooks to some unnamed competitors — pretty obviously the MacBook Air and the Acer Aspire S3. The claimed SSD speeds are the most interesting, as that has a major impact on performance. 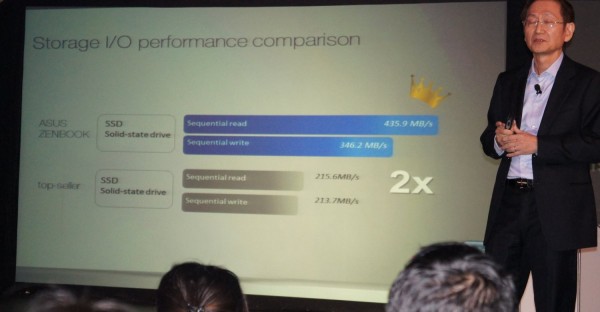 The company touts the sound quality on the Zenbooks, but one potential drawback I noticed is that when you set music to 100% volume you hear some decent audio, but the entire chassis vibrates. This could be distracting while you type if you enjoy listening to music while you work. I will say that music out of the headphone jack does have a nice round quality to it.

Availability for the other Zenbooks hasn’t been announced, though it shouldn’t be too far away.

As soon as we get a unit in for review we’ll let you know what we think.