It should come as no surprise that AMD isn’t content to let NVIDIA go around claiming the “Fastest. Notebook GPU. Ever.” for long. Just weeks after the flagship NVIDIA GTX 580M GPU launched, AMD has fired back with the new AMD Radeon HD 6990M, a premium notebook GPU which the company is calling “The World’s Fastest Notebook GPU.”

According to AMD the new Radeon HD 6990M clocks in at 25% faster than the competing enthusiast class graphics options, with notable improvements over the Radeon HD 6790M GPU. But, what fun would benchmarks be if they didn’t call out the competition.

AMD says that the Radeon HD 6990M is better than the NVIDIA GTX 580M when it comes to cames like Batman Arkham Asylum, BattleForge, Dragon Age 2, Quake Wars, Just Cause 2 and others. 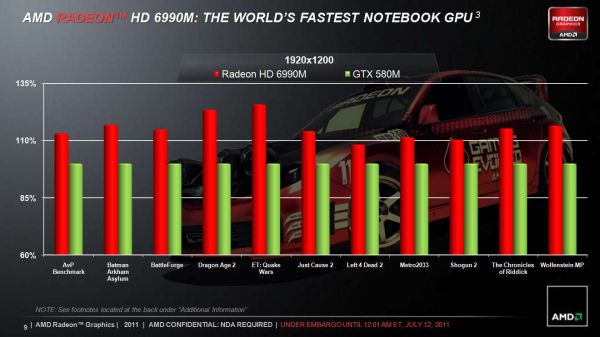 As Slashgear notes, most of these games are not the newest releases, which may explain the wide difference in Frames Per Second during testing. Missing from the release are comparisons for games such as Metro 2033 and Crysis. For a closer look at the Radeon 6990M performance, NotebookCheck has a look at the performance of this new notebook GPU, including how it compares to the competition.

The new Radeon HD 6990M GPU supports AMD CrossFireX technology to combine two GPUs for more power and Eyefinity support for multiple displays. The 6990M handles Direct X11 and thanks to AMD HD3D can deliver stereoscopic 3D for your games and movies. The GPU also supports AMD App Acceleration, which allows apps to harness the power fo the GPU to deliver better performance.

The new AMD GPU will be available in a collection of notebooks this fall. Most users will find the new GPU in the Alienware M18x, but the 6990M will also show up in the Clevo P150HM, P170HM, X7200 notebooks.