Verizon’s new high speed 4G wireless network is fast. The folks at PC Magazine have been testing the fourth generation wireless network and found that if you begin downloading data on the first day of your billing cycle it would take approximately 32 minutes to use up the five gigabytes of date allotted by the wireless provider. 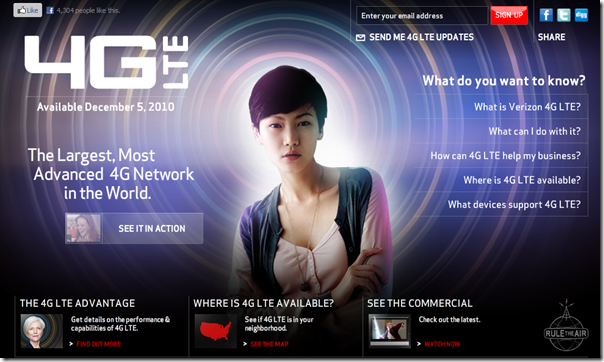 “I’m in the middle of testing Verizon’s new LTE network, and the 2010-era speeds are soured by the 2005-era thinking on data plans. Verizon has priced LTE pretty much like 3G to encourage data sipping, not guzzling. As soon as you start using the latest high-bandwidth Internet services, your whole month’s allotment can evaporate within a day.”

On the positive side the test produced a throughput of 21Mbps, which is very fast. The average speed in his test was at 15Mbps, partly because there are so few users on the network at this time. Watching Netflix video would allow a user about 7.5 hours of video.

By comparison Clearwire, another fourth generation wireless provider which deals in WiMAX charges $45/month for unlimited data and say its users download an average of 7GB/month, according to Segan.

Speculating why Verizon would put the cap on the network when it is so fast, Segan offered two rationales.  First, it could be to preserve their wired network service business. They provide home high speed Internet services and don’t want to cannibalize that business. Many users may be tempted to cancel their home network service to have only one broadband bill using the most convenient and still very fast LTE service. Second, they may be protecting the network itself at the early stages. When the service was announced the CTO of Verizon, Tony Melone, said that the company was moving into this new technology slowly at first. It could be that the pricing model will catch up with the technology at a later date.

At this point the concerns are moot for the vast majority of the United States. The new service is only available in certain larger cities and won’t be widespread until the “end of 2013.”