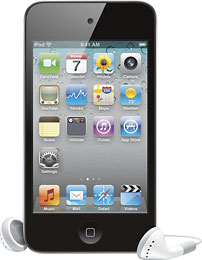 Radio Shack will be giving away $20 gift card with the purchase of an 8GB iPod Touch on Black Friday. There are a number of stores offering similar deals on Black Friday however, and we advise going elsewhere if you’re after an iPod Touch deal.

Apple retailers typically don’t offer significant discounts on iPods and other Apple gear. Instead, they often throw in freebies to sweeten the deal. The MSRP of the 8GB iPod Touch is $229 and you won’t find it much cheaper than this, even on Black Friday.

This is the current generation iPod Touch, which is capable of running all of the most recent iOS4 apps. It comes with dual cameras for HD video recording and FaceTime.

The best Black Friday deal we’ve found on the 8GB iPod Touch is from Wal-mart, which will be selling for $225 and throwing in a free $50 Wal-mart gift card. Best Buy has a similar deal, but you’ll get a $30 Best Buy gift card instead.