The white Griffin Reveal Case for the iPhone 4, which I previously reviewed, was slightly modded by a creative user who then contacted Griffin about a problem with the case. The result of her creativity was a box of free iPhone cases from a Griffin customer service representative with a sense of humor. 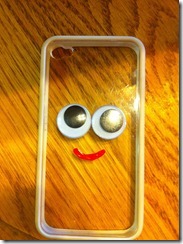 Christina, a reader of The Unoffical Apple Weblog, reported that she bought the white case for her iPhone 4 from a local Best Buy. But after it began to show discoloration, she contacted Griffin Technologies about the matter. As she said the sides got really nasty.â€ I can confirm that my white Griffin Reveal Case has also changed colors. I chalked it up to the case being white and my using it while helping lead a soccer camp out in a dirty field for a week after I wrote my original review.

After contacting customer service, Griffin customer service representative Curt promised to replace her case if she could show that there was a problem. She sent some pictures of the case. But what the pictures revealed was that she had modded the case just slightly by adding some glue on eyes and a mouth drawn with red paint. She said that she named her case Lester.

Because Curt enjoyed the mod, he told her that if she would send him the case he would replace it with both a white and a black Reveal case. She agreed and sent it in. Curt sent her a black case. Then shortly after another box from Griffin arrived, this time with six different cases, all with drawn faces and names. Only one was left unmodded with a note attached saying, Design your own.â€

The moral of the story is that Griffin has at least one customer service representative with a sense of humor. The other moral of the story is that, while I first really like the white Griffin Reveal case, I can no longer recommend it due to the problem with it getting really nastyâ€ after some ordinary use. I will share my feelings about the black case once I get it from Apple, since that is the one I ordered under Apple’s free case program.

For a full look at the Griffin Reveal iPhone 4 cases with drawn on personalities visit Christina’s Flickr page.