Gateway has announced a new netbook, the GateWay LT23 series which is targeted at users who want to have a fashionable netbook that’s thin and weighs just 2.76 pounds. The 10.1″ netbook is a new design for Gateway and features an, “organic woven pattern that appears to be mosaic.” This fashion focused design extends past the matte cover and onto the palmrest and is available in champagne, black and pearl.

While the outside of the device is new and flashy, the Gateway LT23’s specs are standard fare for a netbook. The LT23 is powered by an Intel Atom N450 processor, 1GB RAM, up to a 250GB hard drive, three USB 2.0 ports, Ethernet, VGA, a card reader and a 10.1″ screen which is limited to a 1024×600 resolution. The good news is that this is enough for many users to surf the web and look at a few work documents on the go and with an 8-hour, 6-cell 4400mAh battery you can use the Gateway LT23 all day without finding a place in your bag for the charger. 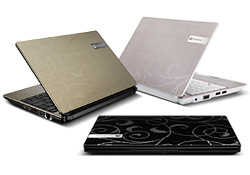 The Gateway LT23 does have another feature that could prove useful — integrated social networking. The function keys on the LT23 allow users to have one touch access to social networking sites do that they can see status updates as well as share their own status, pictures and video. The Gateway LT netbook does offer an HD webcam which can be used for standard video-chats or as an integrated part of the social network features.