2010 is a big year for AMD. After a rough few years the new VISION branding, which makes it easier for consumers to shop for computers, combined with new processors that offer better battery life, even on a Quad-Core system, appears to be setting up Advanced Micro Devices to give Intel a run for the consumer notebook market.

Adding to the numerous AMD powered devices we have already seen, including many recently announced HP Pavilion notebooks and the Lenovo IdeaPad Z565, AMD is going to be in 109 new notebooks and netbooks in 2010 — triple that of 2009. These new AMD powered notebooks fall into two categories; Ultrathin and Mainstream. 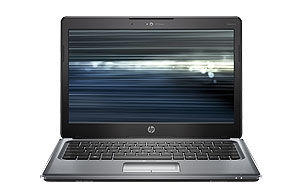 The AMD VISION branded Ultrathin notebooks will be defined by several features:

These notebooks will include devices from numerous major manufacturers and include the HP Pavilion dm1, Pavilion dm3z, Acer Aspire 5625, Lenovo Edge 15 and more.

Based on the tests done at AMD these new notebooks will be able to Rip Movies in half the time, share multimedia 3x faster, provide smoother framerates and allow for 10% faster multi-tasking compared to the competing ultrathin notebooks.

These AMD VISION Ultrathin notebooks will be powered by the following new processors and technology.

Sascha from Netbooknews.de has already recorded a hands on video of the Acer Aspire One 521 powered by the AMD Athlon Neo Dual-Core processor and ATI Radeon HD 4225 graphics:

The Mainstream AMD VISION notebooks will also be defined by their features including;

These mainstream notebooks include devices from many major manufacturers and include the HP Pavilion dv6, Acer Aspire 5551, Dell Inspiron 15 “Berry”, the Asus N61 and more. Like the Ultrathin AMD notebooks these notebooks claim to provide users with improved usability. These benefits include; 20% faster Adobe Photoshop Elements 8 performance, creation of slideshows in 3/4 the standard time, faster music management and video conversion than competing notebooks as well as smoother gameplay in a game like Call of Duty 4.

These AMD VISION Ultrathin notebooks will be powered by the following new processors and technology.

Overall we are excited to see a new crop of AMD processors that are focusing on performance and battery life. We can’t wait to see how these systems handle and if the testing can live up to real world use scenarios. Below you’ll find a final look at the AMD VISION experience levels that will be assigned to each of these notebooks in order to help shoppers find one that fits their needs.