Recently we reported that Eye-Fi released new software and added more public hotspots for uploading pictures. Now, the company is announcing further expansion of their hotspot network thanks to a partnership with Devicescape, Wi-Fi connectivity provider and makers of Easy Wi-Fi. They are most recently noted as the provider of the now free McDonald’s Wi-Fi hotspot service.

If you’re not familiar with Eye-Fi, it’s the Wi-Fi enabled SD card that allows you to upload pictures via wireless immediately after taking them with your digital camera.

“Eye-Fi will unlock hundreds of thousands more Wi-Fi networks globally through a partnership with Devicescape. By the end of May, X2 users can upload in thousands more open networks around the world, such as universities and cafes, and through Wi-Fi hotspot providers.” (Eye-Fi press release)

This will make the card much more useful when traveling out in public with your digital camera and Eye-Fi card. Just today I tried to upload some photos with my Eye-Fi card at a Panera Bread store with Wi-Fi, but was unable due to the annoying login required to get on their network.

In addition to the partnership with Devicescape, Eye-Fi is also announcing a new product sold exclusively at Apple stores. The Eye-Fi Geo X2 will be sold starting sometime in May. Here are some of the features of this new card: 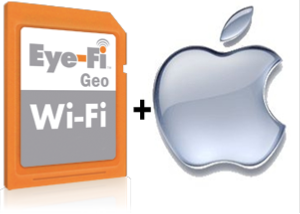 The cards are class 6, which guarantees a minimum of 6 MB/second, and have 4 GB of space. They will sell at the Apple store for $69.99.