I’ve been heavily using my iPad and trying to share as much of it as I can with Notebooks.com readers. But April 8th marks a big day in Apple mobile device history as Jobs will be revealing the next generation of the iPhone OS. As both an iPhone and now an iPad user here are my hopes and dreams based on some of the wild and plausible predictions being proffered all over the Internet. Like everyone else, I’m just guessing. No one who has a clue is talking and anyone who is talking has no clue. I may be wrong about that, but I doubt it. I just follow the turns in the road and look at where things seem to be going. Here are a few things I think Jobs will be revealing and a few he won’t. 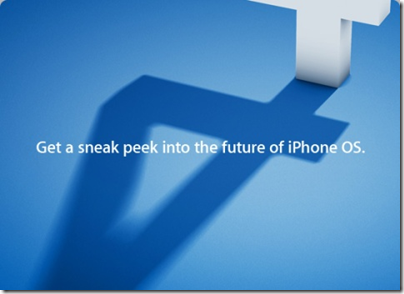 To say you cannot multitask is not entirely accurate. You can listen to music while running other apps. But with the iPad’s release, this becomes far more important as people will be needing to work with more apps at once. I believe that there will be limited multitasking. However, it will be less limited than it is now. I am guessing that we will be able to switch between apps without losing our places in them. For example, if you are working in a Pages document on the iPad and want to open Safari to find some information or an image to add to the document, you will be able to press the Home key and open Safari, copy whatever you wanted to add to your document, and then open Pages and everything will be as it was when you hit the Home button. That way you could add the picture or text you copied from Safari without having to reopen the document. This is how things work when you receive a phone call. Why not when I close the app too?

Right now, to get a document on your iPad for use in any of the iWork apps, you have to manually add it via iTunes. I showed how previously.

My hope is that this will become automatic, much like it is with pictures. Right now you can specify a folder to automatically sync pictures between the iPhone OS devices and your computer. I believe they will let you do the same for documents and book files as well. That way, if I’m working on a document on my PC or Mac, I can save it in this folder and it will sync to my iPad next time I connect. And adding books to iBooks will hopefully be just as automatic. That way I can add my own ePub books automatically instead of manually as is required now. There will be a similar functionality for the iPhone and apps like PDF readers or office style apps. Maybe the Notes files will sync as well.

I believe the next iPhone and iPod Touch will have faster hardware. A faster processor at least and maybe even faster Wi-Fi will be announced as well.

I think our iPhones and iPads will inform us of meetings, text messages, and other things like missed phone calls in a better way. How will it be better? I have no idea. I just have hope and trust that it will.

The iPad has delivered more battery life than many of us expected. I was pleasantly surprised. Now its time for the phone to match it, or at least move in the right direction.

Here’s a few things I doubt will be in the next release:

If I’m right about a lot of this, you may think I had some inside info. If I’m wrong, you will think I was just taking a wild stab in the dark. The latter is the case. I am guessing like everyone else. At least we’re being honest about it, unlike all the rumor sites out there who claim unnamed sources.