The iPad and Grandma

I had no concrete plans of purchasing an iPad until I spent a few minutes playing with one. It literally took just a few minutes of touching Apple’s new tablet computer before I gave in to temptation and asked the Best Buy employee how many were left in stock. The quick, beautiful interface and responsive touchscreen keyboard helped seal the deal.

I managed to snag my iPad from the Best Buy in Fort Wayne, Indiana. The store didn’t open until 10:00 a.m. and I expected they would quickly sell out. I arrived near noon, and to my surprise the Best Buy associate informed me he had a few of each model in stock, but they were going fast. The receipt checker who stands by the door said there had been a steady flow of people coming in throughout the morning to purchase iPads. After playing with the iPad for a full day, here are the answers to a few questions I had before buying.

How good is the touchscreen keyboard?

I had serious doubts about how well Apple could design a workable, touchscreen keyboard. You won’t want to use the iPad to type a graduate school thesis, but it works for plugging in a URL, pounding out a quick email, or doing a little social networking. The iPad’s keyboard is large enough that I can pretty comfortably type with two fingers on each hand. It will definitely get some taking used to, and you will be better equipped to type on the iPad’s keyboard if you’ve had experience typing on an iPhone or similar smartphone screen. I’m finding it best to thumb-type in portrait mode, and use two fingers when in landscape. With fairly large hands, I’m able to use the device without too much complaint.

How is the speaker/audio output?

Another surprise with the iPad that the speaker is louder and clearer than I expected. I was picturing something dull and high-pitched. While watching an episode of ABC’s Modern Family last night with my wife, we were both happy with the volume and sound produced by the iPad’s speaker. You shouldn’t expect it to be your main sound system, but the speaker isn’t bad for watching a video or listening to a few songs.

How is the screen/overall design?

The screen is plenty big for the device. I was worried that the black bezel would distract from the picture, or make the screen seem smaller. In fact, the black area surrounding the iPad’s screen provides the perfect non-touch area to hold the iPad with your fingers. Like most Apple products, the screen is bright and colors are vivid.

The iPad does become heavy over an extended period of time. The sharp edges are not helpful when holding the device. I eventually plan to purchase the iPad case which also allows the tablet to be conveniently propped up.

What about battery life? 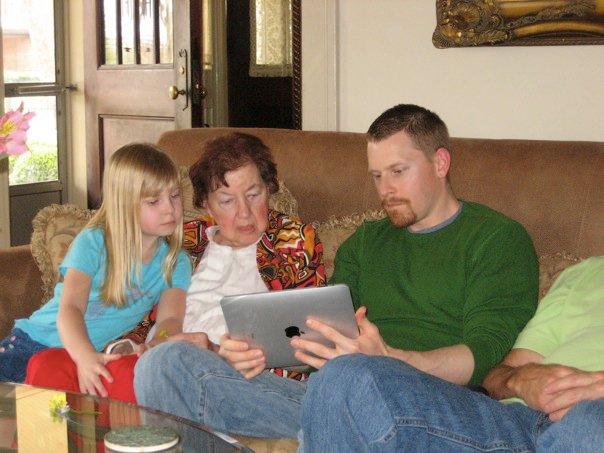 The true success of the iPad will come when people unfamiliar or uncomfortable with technology get an iPad in their hands. For example, my 90 year old grandmother had her first enjoyable iPad experience. My grandmother has never used a computer and knows very little about the Internet. She was puzzled at how I had gotten pictures on the iPad after only owning it for a day. Her interactions were limited, but she was taken back at how speedily pictures appeared and how it was possible to zoom in and show detail. The iPad is a device which will invite a new generation of folks to computing and the Internet.

You may not be an Apple fan, you may be holding out for an alternative tablet computer, or you may think there isn’t a need for yet another electronic device in your repertoire. Despite whatever you think, one thing is certain. The iPad will change how all people interact with and touch technology in the future.