The new taskbar in Windows 7 is arguably one of the best improvements from a user interface standpoint. Not only has it given users the ability to better organize their running programs, but it is easier than ever to control what it shows and add extras to it. In previous versions of Windows changing the default appearance in a meaningful way meant installing a hacked .dll file or other relatively easy, yet intimidating, tactics.

Thankfully in Windows 7 tweaking, hacking and personalizing your taskbar isn’t just simple it’s incredibly useful! We gathered a collection of Windows 7 taskbar additions and hacks that will make your computer easier to use and hopefully make you more productive.

This is my favorite Windows 7 Taskbar hack because it adds important information to your taskbar without being gaudy or intruding. It’s great to be able to see how much battery life I have left, or ensure that speakers are turned down without squinting at the bottom right corner of my netbook. To add battery life and more to your Windows 7 Taskbar just install SuperbarMonitor. Via DownloadSquad.

If you constantly need access to your recycle bin and don’t want to leave it on your desktop, you may want to add a completely functional Recycle Bin to your Windows 7 Taskbar. If you read the previous tweak to put the Quick Launch toolbar on your Windows 7 Taskbar then you’re halfway done with this hack; which amounts to dragging your recycle bin onto the Quick Launch bar. Seriously, that’s all it takes to add the Recycle Bin and you’re ready to delete and restore to your heart’s content. 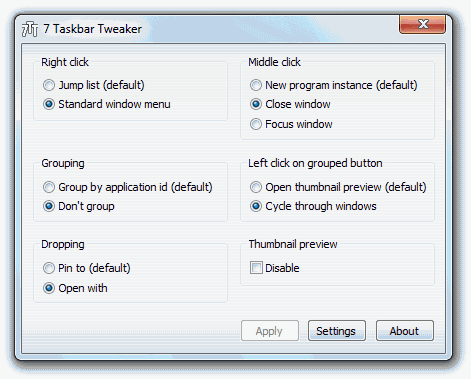