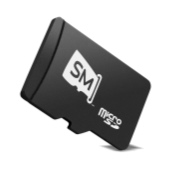 SanDisk is teaming up with major recording labels and retailers to sell music on MicroSD cards. The “slotMusic” MicroSD cards will come pre-loaded with DRM-free albums in MP3 format, album art, liner notes and videos on select albums.

The slotMusic albums can listened to on any mobile phone that accepts MicroSD card and supports MP3, as well as any computer thanks to an included USB adapter.

I really like SanDisk’s products and use several of their products on a daily basis, but slotMusic is going to be the next big thing in music. What the slotMusic will do is help SanDisk sell more 1GB MicroSD cards. From the looks of things SanDisk won’t charge much more for slotMusic MicroSD card than one without music, making it an attractive choice.

Leaders in music, retail and flash memory technology today announced they’re bringing consumers an innovative, new physical music format, dubbed slotMusicâ„¢.â€ microSDâ„¢ cards will soon be made available with pre-loaded, high quality, DRM-free MP3 music of top artists from EMI Music, SONY BMG,
Universal Music Group, and Warner Music Group. A selection of slotMusic cards will first be available at brick-and-mortar and online stores throughout the U.S., including Best Buy and Wal-Mart, with Europe to follow. A complete list of slotMusic albums, availability and pricing will be announced in time for the
coming holiday season. SanDisk Corporation (NASDAQ: SNDK), inventor of the ubiquitous microSD
format, is leading the technology development behind slotMusic.

slotMusic cards enable consumers to instantly and easily enjoy music from their favorite artists without being dependent on a PC or internet connection. Users simply insert the slotMusic card into their microSD-enabled mobile phone or MP3 player to hear the music without passwords, downloading or digital-rights- management interfering with their personal use.

slotMusic cards will be packaged with a tiny USB sleeve ensuring seamless interoperability with all
computers Windows, Linux and Mac. The upshot is that slotMusic will enjoy an unparalleled, pre-existing Music, Retail and Tech Partners Announce slotMusic installed base at launch: hundreds of millions of multimedia-phones, virtually any computer with a USB connector and a growing number of in-car sound systems will be able to play slotMusic cards.

The MP3-based music tracks will be played back at up to 320 kilobytes per second (kbps), offering a high quality music experience for the MP3 format.

Musicians will find slotMusic cards offer a compelling new way to express themselves to their fans. With
1GB1 (gigabyte) of capacity, slotMusic cards can hold songs, as well as liner notes, album art, videos, and other creative content that an artist may choose. Consumers can also add their own content to a slotMusic card, creating a personal plug-and-play media library.