Heath Ledger's Best Buy 'Tribute'… Someone Should be Fired

I didn’t realize Best Buy was struggling so badly that it had to resort to this “tribute” to Heath Ledger just a few hours after his death. Someone that works at the Missin Valley San Diego Best Buy threw a few DVDs on a table and erected a sign in the same format of a tombstone (name, dates of birth/death and a couple of lines about how the person’s going to be remembered) before many even knew he had passed away.

I’m not a movie geek, but this is really tasteless. I know that this was probably the work of a rogue manager who wanted to hit some sales goals or just be “creative,” but there’s a reason why big companies have centralized marketing efforts.

I’m not sure where this table was placed in the store, but there’s nothing like the thought of death to get someone out of a gadget buying mood than the thought of death. I’d be willing to bet at least one customer walked away from buying a laptop, TV or other high-ticket item at Best Buy because of this stunt. 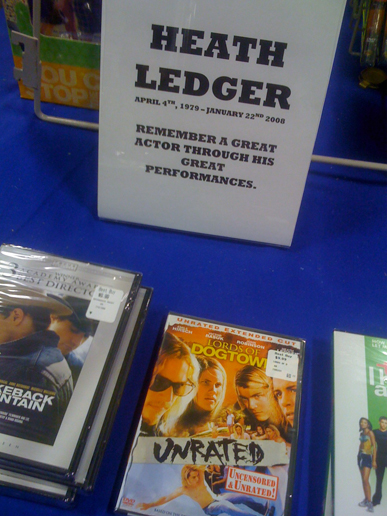 via Best Week Ever