Hitachi announced the world’s highest capacity 2.5-inch mobile hard drive. The Travelstar 5K500 boasts 500GB of capacity but it won’t fit in mainstream notebooks.Rather than increasing data density, Hitachi is stacking two 250GB platters into the drive. The drive is 12.5mm thick, rather than the standard 9mm for notebooks.

The company should’ve added “fat laptops” to this list. It’s nice to see a 500GB 2.5-inch drive, but what’s the point if it can’t even fit in most notebooks? 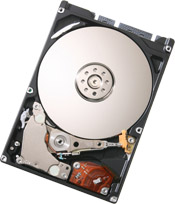