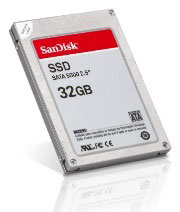 SanDisk today added a 32GB, 2.5-inch Serial ATA solid state drive (SSD) to its notebook product line. The new drive is compatible with most mainstream notebooks and is a direct replacement for hard disk drives.

“The SanDisk 2.5-inch SSD brings the extreme durability, outstanding performance and low power consumption of solid-state flash memory to the entire notebook computer market,” said Amos Marom, vice president and general manager of the Computing Systems division at SanDisk. “As SanDisk continues to drive innovation in flash memory, the per-gigabyte price of SSD storage will come down and SSD capacity will go up. PC manufacturers and consumers will find it easier and easier to move away from rotating hard disks to the superior experience of SSDs.”

Notebook manufacturers will have to pony up $350 per 32GB SSD, far more than high capacity hard drives. But there are several benefits to replacing rotational notebook drives with SSDs. There are several applications where reliability and durability are more important than price-per-GB and larger storage capacity.

“There are several reasons computer users and manufacturers should consider SSDs as prices become more affordable,Ãƒ¢Ã¢â€š¬Ã…Ãƒâ€šÃ‚ said Joseph Unsworth, Principal Research Analyst for flash memory at the Gartner research firm. Ãƒ¢Ã¢â€š¬Ã…For example, Gartner research shows hard disk failure is tied for first place with motherboard failure as the leading cause of overall hardware failure in notebooks, with each accounting for 25 to 45 percent of the total.”

Average consumers and most business users should steer clear of SSDs unless they have a distinct need for them for the time being. The gap between HDD and SSD capacities and price is too great to justify.