Everyone’s making super thin and similarly light ultra books, but there’s still room for the old-fashioned style black squared-off business class notebook and the Lenovo ThinkPad T450s represents the best in this market. This premium notebook gives users the excellent ThinkPad keyboard with a trackpad and the little red pointing nub that Lenovo calls the Ultravan pointing device, but most of us call the little nub or eraser.

Business users who want one of the best notebooks available and care more about function than unique or industrial design will love the Lenovo ThinkPad T450s because it’s got some power, includes a decent screen, great keyboard and excellent battery life with the larger battery option. 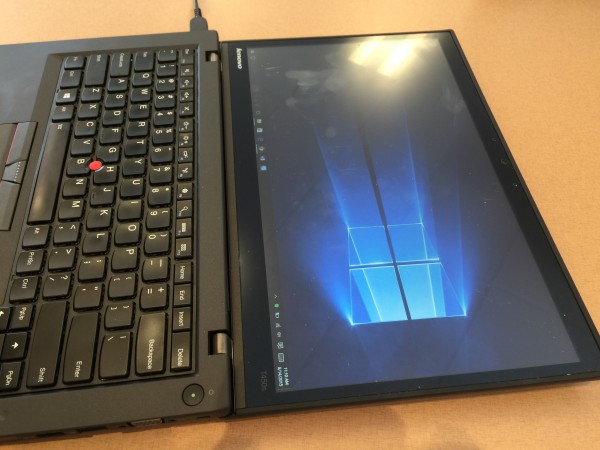 If you want an amazing design like the MacBook Air or the other ultrabooks, then don’t look at the Lenovo ThinkPad T450s. It’s the traditional ThinkPad design, black with sharp squared off corners. It’s thinner than the old-fashioned ThinkPad, but Lenovo’s familiar look is still there. Lenovo identifies this model as an Ultrabook, but that’s a stretch. It’s clearly not what most buyers think of when they hear Ultrabook with a minimum weight of 3.5lbs. Ours weighs in at over 4.

The top lid carries the Lenovo and ThinkPad logos with the familiar glowing red dot above the “i” in ThinkPad.

The hinge holding the screen in place bends back all the way so that the display lays flat facing up along with the keyboard. That’s if you don’t have the larger battery installed. With it the computer lid doesn’t bend back far enough to lay flat on the surface.

That larger battery does lift the back of the computer up enough to give users a comfortable angle for typing. 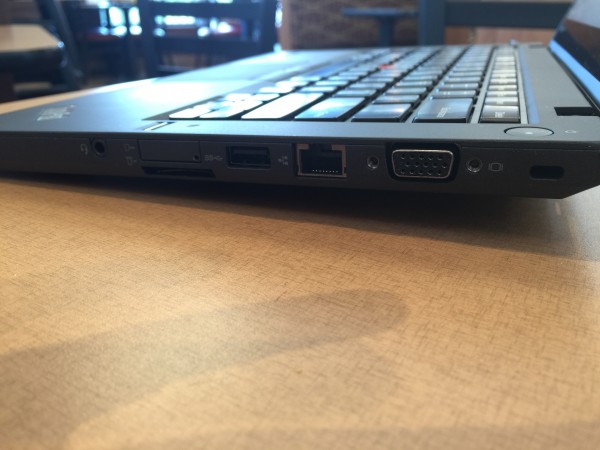 A fingerprint reader sits along the edge just right of the arrow keys. The reader registers fingerprints accurately and unlocks Windows quickly most of the time. On occasion the reader fails, but usually it works the second time and this only happens on one or two out of ten times. 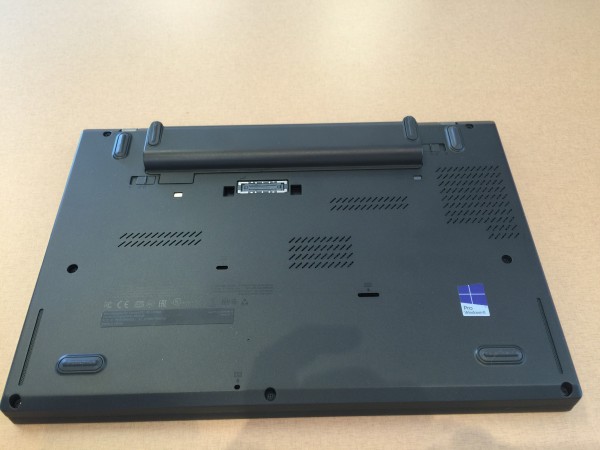 The display on the Lenovo ThinkPad T450s measures 14 inches and sports 1920 x 1080 resolution, with a slightly lower resolution option available at 1600×900. 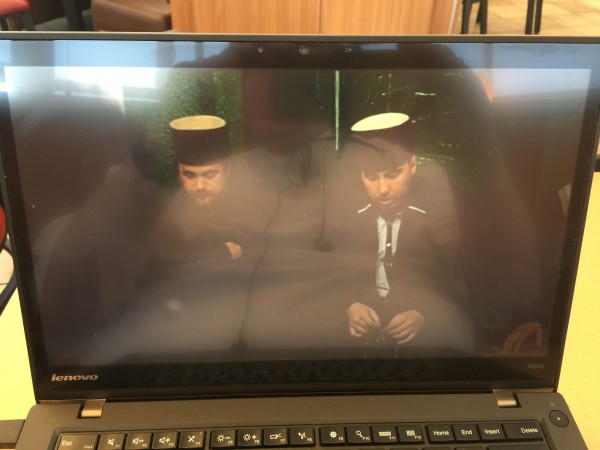 The screen’s a glossy touchscreen offers a very wide viewing angle in normal light. Three to five people could sit around the computer and still make out what’s on the screen. Even text comes across clearly.

The glossy finish gets slightly annoying in sunlight or in a bright room. The screen’s brightness also makes it hard to see. It could shine brighter.

Text looks crisp and easy to read, even small fonts. Presentations and streaming video look nice as well, even if a bit dim.

Touch typists will love the backlit keyboard on the Lenovo ThinkPad T450s. Lenovo makes the best keyboards in the business. They’re not the typical island style or chiclet style keyboards we see on almost every laptop these days. There’s more travel and better spacing on their keyboards to help fast typists accurately write for hours.

The backlighting will help users work in dark situations. Use the function key and space bar to turn on the backlight. Hit the key combo once to turn it on, a second time to brighten it and a third time to turn it off saving some battery life. 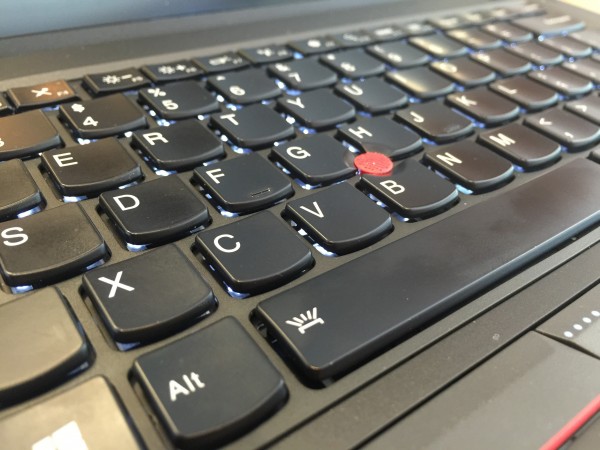 The key placement on this excellent keyboard won’t surprise users with strange arrangements or placement. Everything’s in the expected spot keeping typists from hitting the wrong keys while reaching for special keys or the numbers. 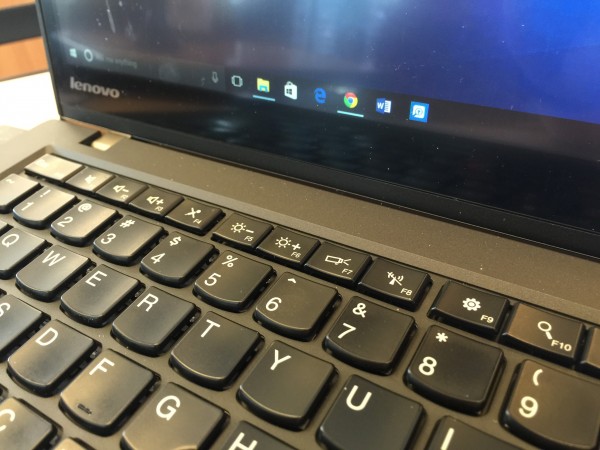 Along the top the function keys serve dual purpose, like most notebooks today. We get typical F1 through F12, but each key offers other Windows-based shortcuts or special functions like volume control, brightness levels, turning on and off features and opening Windows features. A key will open the settings screen, search or Cortana in Windows 10, the task switcher screen and the Start menu/screen.

Lenovo put a decent trackpad just below the keyboard. The traditional ThinkPad mouse button arrangement above the trackpad takes some getting used to for people who use computers that put the buttons below the trackpad. There’s three of them, which lets the user work with the default operation of the center button or they can customize it in the settings software. 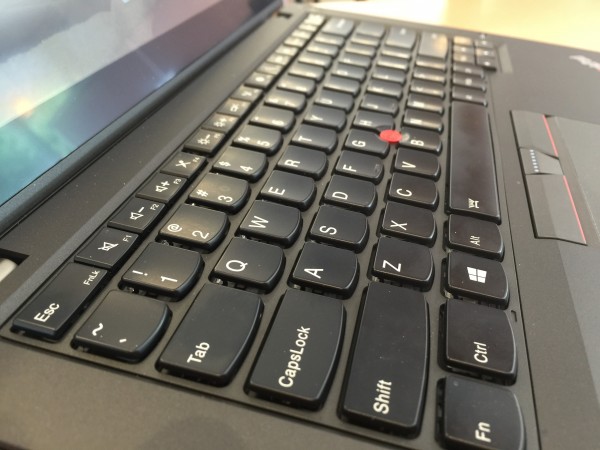 The red Ultranav Trackpoint button that looks like a red eraser sitting between the G, H and B keys takes getting used to. Longtime Lenovo fans often love this thing, but even though I forced myself to use it for a while, I couldn’t get proficient with it.

Placing the buttons below the space bar makes it easy to use them while pointing with the Ultranav Trackpoint nub.

We get very good battery life with the Lenovo ThinkPad T450s. As you’ll notice in the screen shot below, with about a quarter of battery power left, we can expect about 2 more hours. The Windows 10 guess matches actual battery life most of the time. When I took this screen shot, I set the display brightness to 100%, so I could easily add a couple of hours if I lowered that some. 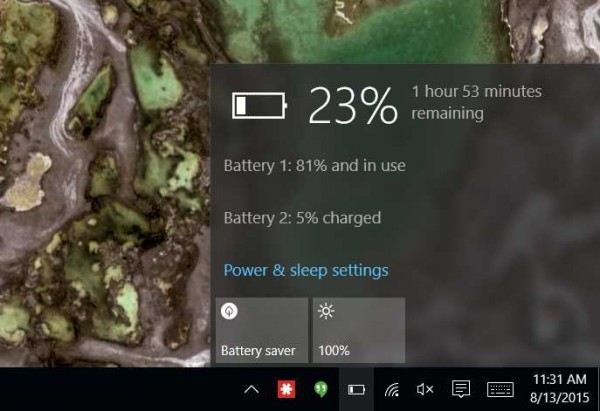 The Lenovo ThinkPad T450s comes with two batteries so the user can hot swap without shutting down.

Lenovo gave us two batteries to test. One smaller 3-cell battery and a larger longer lasting 6-cell battery that also adds some weight and thickness. In fact the larger battery props up the back-end of the compute for a comfortable typing angle. 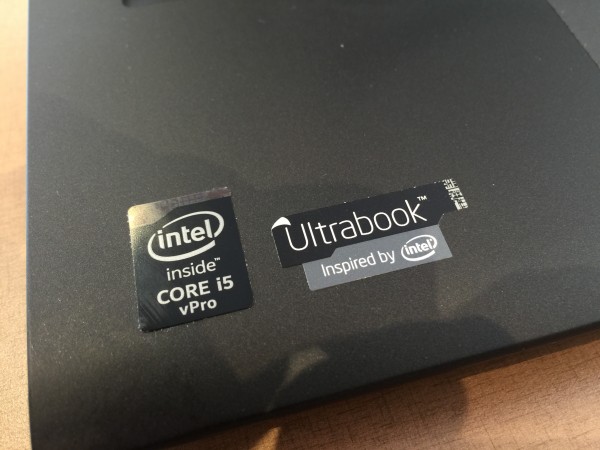 I reviewed the mid-level with the Core i5. The processing power and 8GB of RAM makes for a speedy system. Add in a fast 256GB SSD and the machine boots quickly, programs start in seconds and the machine provides lots of headroom for running a number of programs at once.

Business users who also enjoy some gaming will be able to play older generation games that don’t need dedicated graphics. The machine handles video and photo editing too. It’s a useful all-around machine for anything but high-end needs. 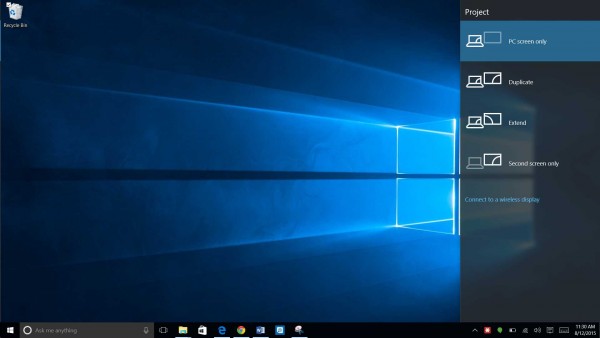 Microsoft released Windows 10 in the middle of my time with the computer. So I ran the upgrade and it installed without any issues. After running Lenovo’s driver update software, the system rebooted and ran perfectly.

One issue caused some annoyance. Shut the lid and the system goes into sleep mode. If I close it and then open it quickly, the system struggles to wake. A couple of times I had to force the system to shut down by pressing the power button for about ten seconds. Then the computer restarts quickly and runs without a problem. Expect an update to fix this soon. Lenovo supports their systems well.

After the upgrade I thought to run the Lenovo Superfish Uninstaller. That’s the well-publicized exploit that Lenovo installed on many of their notebook computers. The software spies on the user and then displays ads in their browser. Fortunately it found no traces of the exploit.

Is the Lenovo ThinkPad T450s Worth Buying?

I own an earlier version of this computer and love it. Lenovo updated it in all the right ways, replacing some of the function keys with dedicated keys for settings, search and task switching instead of a pair of keyboard backlight brightness. They sped it up with newer specs and a faster SSD. At the same time we get the same great keyboard and overall design familiar to ThinkPad users.

The Lenovo ThinkPad T450s Ultrabook that Lenovo sent over starts at $953.10 direct from Lenovo. Configured with the 1080p screen, backlit keyboard, 256GB SSD, 8GB of RAM and some other specs, which we got on this review unit, it costs over $1,400. The extras make it worth the price if you can afford it.

The Lenovo ThinkPad T450s is a high-end business class computer that we think should hold up well and gives users premium hardware for a premium price. It runs Windows 8.1 unless the user wants Windows 7. Upgrading to Windows 10 was easy.

Lenovo loads down their computers with too much crapware, but the user can remove it and will enjoy the system more without some of it.

If you want one of the best Windows computers I’ve tested and don’t long for a super thin ultraportable design, then buy the Lenovo ThinkPad T450s. 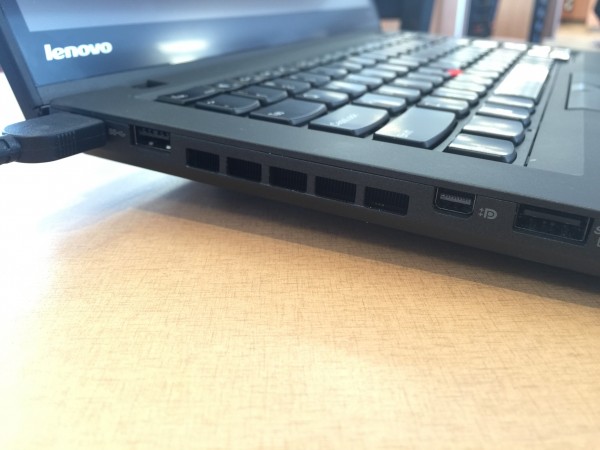