Samsung Portable SSD T1: Up to 1TB of Storage in Credit Card Size

The Samsung Portable SSD T1 is an extremely small storage solution for users that need to carry more data than they can fit on their notebook hard drive. With many notebooks offering a 128GB or 256GB SSD inside to allow for speedy use, many users are finding themselves running out of space on their Ultrabook, MacBook Air and Macbook Pro, but this small new portable SSD from Samsung can solve this problem.

Samsung’s new Portable SSD T1 offers 250GB, 500GB or even up to 1TB of storage in a package that is no larger than a credit card. It’s not just a small storage solution, it’s a fast one as well with up to 450MB per second transfer speed. Instead of plugging a traditional $80 portable hard drive into your fast Ultrabook or Macbook Air and losing the speed benefits of the built-in SSD, you can use this device to get storage that moves as fast as your computer. 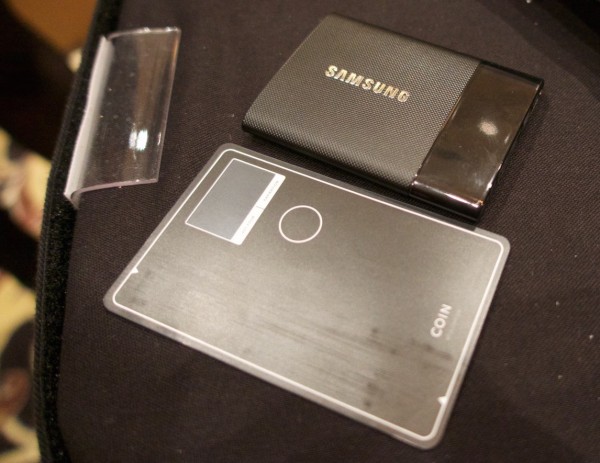 The Samsung Portable SSD T1 is an extremely small SSD that is also blazingly fast.

As you can see in the photo above, the Samsung Portable SSD T1 is close to the size of a credit card. It measures 71.0 x 9.2 x 53.2 mm and is very lightweight. You won’t know this is in your bag, pocket or purse, which makes it incredibly portable. The chrome and metallic finish combines with a textured shell that complete the look and feel of this device.

The SSD inside uses new V-NAND storage solution that allows for the small size, performance and reliability. The transfer speeds of up to 450MB per second require USB 3.0, but the drive will also work on USB 2.0 ports. There is AES 256-bit encryption using the optional password protection.