It’s been said by many that there has never been a better time to purchase a computer running Microsoft’s Windows operating system. That’s certainly true: there’s an explosion of innovation in the Windows PC space. New form factors with touchscreens, flat keyboards and little extras are arriving on stores shelves with astonishing speed.

At first glance, the Lenovo Y40 isn’t supposed to be one of the machines users are excited about. It’s a decidedly old fashioned approach to computing. It doesn’t include a touchscreen, so buyers aren’t going to be interacting with Windows 8’s apps through anything other than a mouse and keyboard. It doesn’t have a suicide hinge for instantly transforming into a tablet. 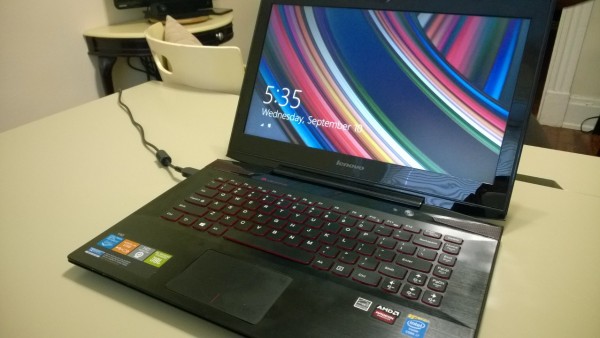 And yet, the Lenovo Y40 is a computer users should get excited about. It is a device that anyone thinking  about picking up a Windows PC should take a look at. Why? Because the Lenovo Y40 is almost self-aware in the sense that it isn’t trying to be anything other than a very robust multimedia laptop.

For the last few years Windows machines have been stuck on a proverbial treadmill. Since Apple’s MacBook Air unveiling, more expensive machines have gotten thinner and thinner. To compete, Windows device makers haven’t just miniaturized their machines, they’ve also tried to add design flourishes and a bit of personality. 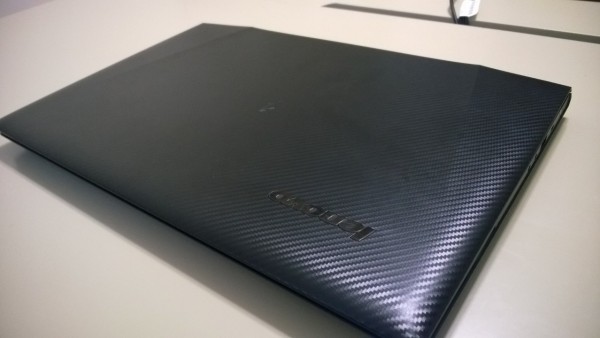 The carbon fiber weave texture on the top of the Lenovo Y40.

The Lenovo Y40 is an angular beast. A polycarbonate shell cuts at a few angles. That carbon fiber weave carries through to the bottom of the machine where the long fan vents interrupt that nice weave texture. The left and right sides of the Lenovo Y40 drop are slightly inset and include every last single one of the machine’s essential ports. 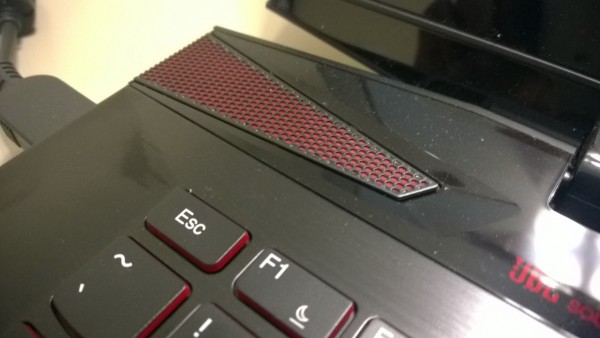 The JBL speakers on the Lenovo Y40 are amazing.

I’d say that overall, the Lenovo Y40 gets high marks for trying to feel sophisticated, but doesn’t exactly bring it home due to some details. The Lenovo Y40 doesn’t come with any gloss on its display, but the bezel around the display is nothing but glossy. I found being able to see the window behind me around the screen very distracting, and a curious choice considering Lenovo intentionally made this machine without gloss on the screen to keep glare to a minimum. The bezel is just too big for using glossy plastic to have been a good idea.

With that being said, the Lenovo Y40 gets cool points for being svelte. When closed the Lenovo Y40 fits comfortably in the hand because of its thinness and textured edges. If Lenovo was hoping to lend the Lenovo Y40 an Ultrabook thin profile without the necessary compromises, it succeeded.

On the edges of every Lenovo Y40 are all the ports users need to stay connected to their phones, tablets, printers and just about any other peripherals modern life requires. On the left are two USB 3.0 ports, a power port, one HDMI port and a network port. On the right are a USB 2.0 port, a headphone jack and a SPDIF Audio port, and a full-size SD Card slot.

These ports underscore how the Lenovo Y40 sticks to what notebooks do best. In a world where most notebooks are dropping expansion ports in the name of being thinner, the Lenovo Y40 hits all the essentials. That network port means when wireless isn’t reliable buyers can connect directly to a network. That SD Card slot makes it easy to get pictures off cameras and other devices. Even that HDMI port is a god-send. No display port here, users can simply connect to their television without spending $30 to $40 on accessories.

Users considering purchasing the Lenovo Y40 aren’t doing so just for the wealth of ports, I expect. At $749.99, the Lenovo Y40 is competing with very decent media powerhouses.

Luckily, it comes well equipped. The model I was sent included a 4th Generation Intel Core I7 processor that could boost itself all the way to 2.00GHZ.  That processor plus 8GB of RAM ensured that every app opened quickly and every restart was painless. Star Trek Online took a bit of time to load because of the hybrid drive inside of the machine. But users can ditch that for a Solid State Drive and get just about everything to load faster. They are giving up some storage space. Bluetooth 4.0 and Wireless AC compatibility are included, giving users the best in wireless communication options available.

Once I’d gotten into Star Trek Online the AMD Radeon R9 M275 with additional 2GB of RAM began to shine. Turning the game’s graphics up as high as I possibly could didn’t result in dropped frames, and the game remained playable even in situations where other computers and processors would have crumbled. Lenovo Y40 buyers can boost the amount of RAM online to 16GB if video editing and really graphics intensive games require it.

Every Windows machine can have the same internals and even the same operating system. How you tell a good Windows 8 laptop from a great Windows 8 notebook are from its keyboard, touchpad, display and speakers.

Touchpads are done so wrong in the Windows world that it’s easy to expect every laptop running the operating system to have a bad one. The Lenovo Y40’s touchpad is almost an exception. The touch pad in the notebook is slick to the touch and responsive. The only thing that’s really wrong are the edge gestures that there don’t seem to be a way to turn off. Moving the cursor around in the center is fine, but getting too close to the edge could land you back in an app you didn’t want to open pretty easily. 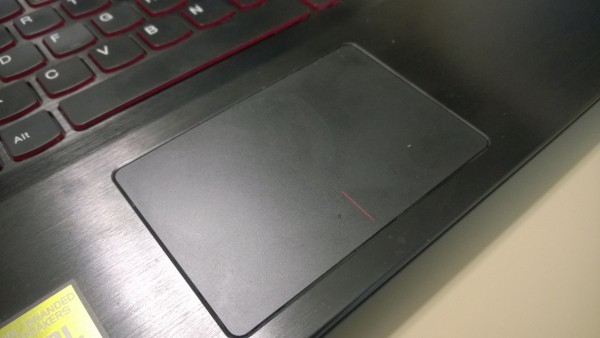 The Lenovo Y40’s Touch pad is nice, even if the buttons are built into it.

Another near perfect component in the Lenovo Y40 is the keyboard. It’s a dream. Each key feels precise and accurate when tapped. When pressed, each key is soft, almost as if you’re typing on tiny pillows that happen to also make things happen on a screen. An extra row of function keys sit off to the right, for easy browsing and mapping to games. One glaring omission that makes the Lenovo Y40’s keyboard not quite perfect is backlighting. The keys on the Lenovo Y40 don’t glow in the dark, which seems like a must-have for the gaming and high-end computing market the device is aimed for. 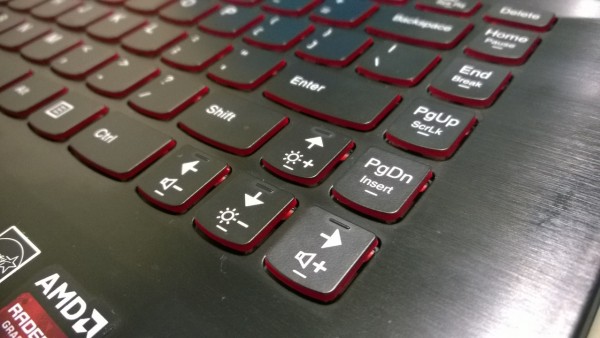 You would think the Lenovo Y40’s keys had lighting. They don’t.

The speakers on the Lenovo Y40 were loud and had great sound. That being said, I did miss the bottom-facing subwoofer from the Lenovo Y70 Touch. As this is a gaming PC that’s meant to be portable, Lenovo can be forgiven for not including it, but the differences in sound from the devices is apparent.

Finally, the display. The 1080p full-HD display offers great viewing angles and nice colors. At 14-inches it’s just enough to be large and portable, but I find myself missing the gloss of other displays a lot. Colors just don’t pop, but that could be a personal preference that comes down to me having only used glossy displays for so long.

Lenovo says that the Lenovo Y40 can hit about 5 hours of up-time. That makes sense, that’s about what I got from it while doing simple productivity stuff. As with all laptops, the amount of time is based on what you’re doing. Playing Star Trek Online turned on the notebook’s rather large fan and had the battery depleted in a few hours. 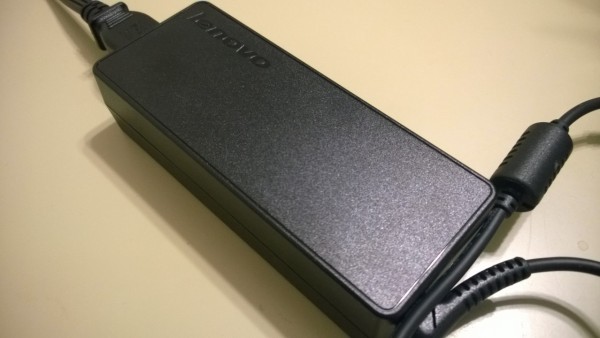 Game too much on the Lenovo Y40 and you’ll need this rather large power brick all too soon.

The Lenovo Y40’s installed applications both make sense and worry me. Skype, Evernote and the 30-day free trial of Microsoft’s Office 365 productivity suite were useful. On the other hand, there were some things that I just didn’t appreciate and recommend that users ditch immediately. Lenovo has a long history of duplicating functionality of Windows with different apps and the Lenovo Y40 isn’t any different. Lenovo Cloud Storage is included despite Windows 8 having OneDrive built in. Lenovo’s decision to bundle McAffee, even though Windows has built-in virus protection, is also questionable. 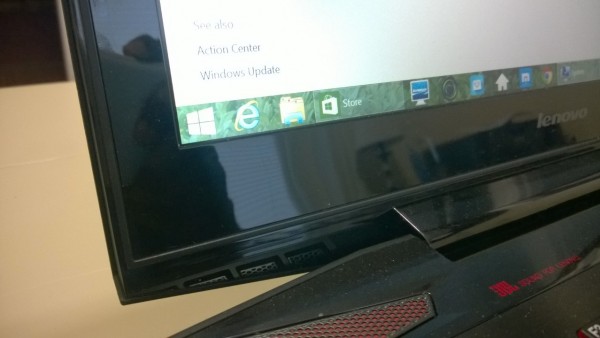 Don’t let this clean taskbar fool you, there are tons of included apps and extra lurking on the Lenovo Y40.

I can say that I did like the idea of the Lenovo VeriFace Pro login system. The app uses the Lenovo Y40’s front-facing camera to automatically log users in. I can’t say that it was terrible accurate in all lighting situations but it was a neat trick that I wish was better supported by Windows.

The Lenovo Y40 is a beast made curious by its price. At a time when notebooks are getting less expensive and adding more features, the missing backlit keys are very noticeable. I’d have liked to see a bit more gloss to make colors on that HD screen pop more. I can’t help but feel like any notebook that costs as much as the Lenovo Y40 demands these.

Really, those – and some cosmetic concerns with the bezel around that HD display, are the only things holding back the Lenovo Y40. Otherwise, it’s a powerful, robust gaming machine at a reasonable price point. Ports are plentiful and it’s super thin and light. You can’t go wrong with it – provided you’re ok with not having gloss. 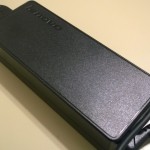 Game too much on the Lenovo Y40 and you’ll need this rather large power brick all too soon. 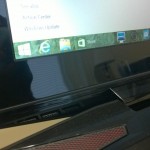 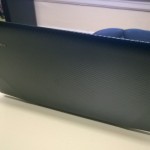 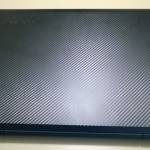 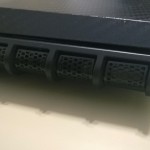 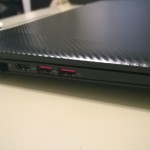 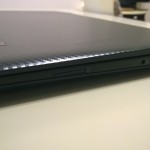 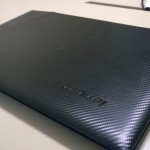 The carbon fiber weave texture on the top of the Lenovo Y40. 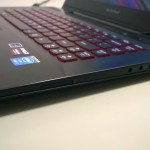 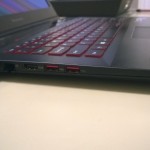 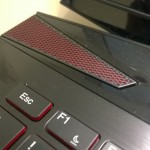 The JBL speakers on the Lenovo Y40. 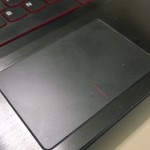 The Lenovo Y40’s Touch pad is nice, even if the buttons are built into it. 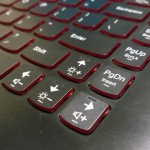 You would think the Lenovo Y40’s keys had lighting. They don’t. 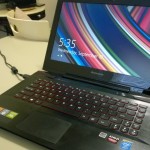