Will Your Next Notebook Have Kinect Built In?

Microsoft’s Kinect has been a huge hit in the living room, bringing accurate motion and voice based controls to the Xbox 360.

This is great for games, but what about work?

The Daily got an early look at these Kinect notebook prototypes, which look to be modified Asus netbooks with Kinect Sensors to bring the power of motion control to Windows 8.

The Kinect Sensors are embedded in the top of the Kinect notebook prototype, and a row of LEDs line the bottom of the display. 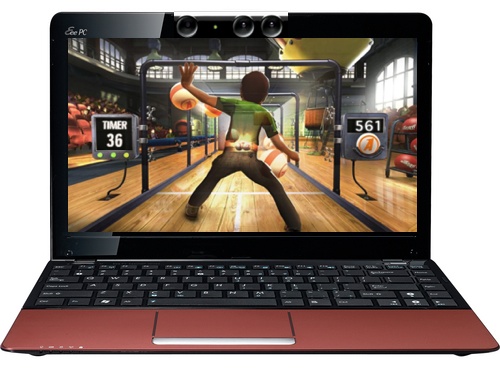 After spending a month playing around with Kinect on the Xbox 360, I could see this being useful for activating programs or switching between apps when I am not directly at the keyboard.

Of course, there is always gaming. With Kinect built into notebooks and Xbox being a part of Windows 8 in some fashion, imagine all those Kinect games you have on your 360, now playable on your notebook wherever you are.

Microsoft also hopes that a Kinect enabled notebook would allow disabled individuals to have greater control over their notebooks and portable devices.

There was no word on how thick these Kinect notebooks were, but as we saw with Toshiba’s glasses free 3D notebook, technology can come a long way in a year. Microsoft won’t be making their own notebooks, but rather allowing manufacturers to integrate Kinect into systems running Windows 8.

The company will face some competition from the likes of Tobii, a company that has developed eye tracking software to allow users to control their computer with eye movement. Check out a demo of Tobii below.