This decrease is partly due to the economy and partly due to the specific entry of more affordable entry level Apple notebooks like the current MacBook and the 11″ MacBook Air. Further declines are likely to come with the further commoditization of notebook components which will reduce the cost, allowing Apple to maintain a profit. 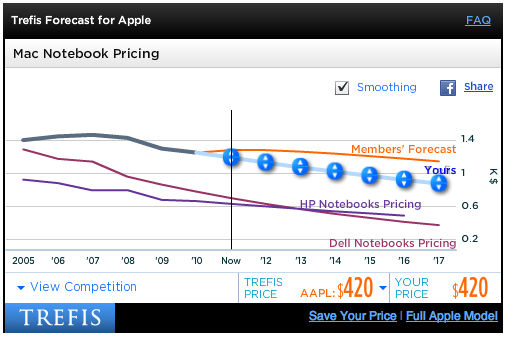 The cheapening of the MacBook isn’t going to happen overnight, even with the increased pressure from the iPad and other manufacturers’ tablets and notebooks the average price of an Apple notebook isn’t expected to dip down below $1,000 until 2015, and the average price next year is expected to be a barely noticeable drop to $1,130.

Apple won’t be alone, and MacBooks won’t look like a bargain, thanks to price drops from the competitors like Dell and HP. The same model predicts that by 2016 the average price of an HP notebook will be $487, down from $698 today. The average price of a notebook from Dell is also expected to drop from $629 today to $371 in 2017.

Is this predicted price drop the end of the notebook? Or of the high end notebook? On both counts, no. While this model predicts a lower average price over the coming years, other analysts and Members of Trefis are predicting that the price will stay relatively flat for Apple.

Another explanation is that we will see a broader range of notebooks from all manufacturers which fit different needs much better and can come in at price points that match the expectations and tasks that they are designed for, similar to how netbooks filled a need.