Earlier we reported that Apple is working on both a smaller iPhone – an iPhone Nano if you will – and some changes to their cloud based backup and storage service MobileMe making it free and offering possible streaming iTunes capabilities.

A new report out of Cult of Mac says that the two stories go together because the new iPhone will not have very much local storage putting all of the user’s content in their MobileMe account instead. This would mean that any songs or videos purchased would be stored online and streamed to the phone over the Internet, either via 3G cellular service or Wi-Fi connected to an internet Service Provider, instead of stored locally on the phone. Also any personally created files like pictures or video would almost immediately be sent to the cloud instead of being stored locally. Any local memory would only house critical system data and temporary storage for content, much like the AppleTV handles streaming of video rather than store all of the videos.

The benefit of cutting out this internal storage is cost – it is far cheaper to have a very limited amount of flash memory for critical system files and a cache than it is to house 16 or 32 GB of storage, as in the case of the current iPhone models. 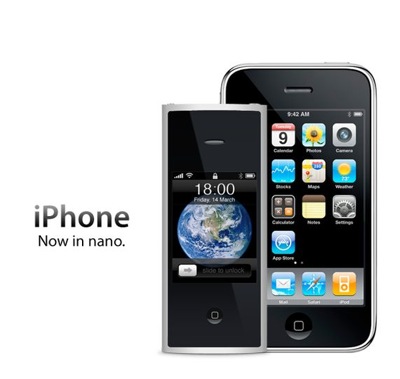 If the reports are accurate, this begs one question for potential customers. What do you do if you don’t have a decent Internet connection available to stream the content?

The AppleTV it is designed to work in conjunction with an always on home broadband connection, but a phone is often in environments where there is either no Internet connection or very low quality connection usable only for voice calls or text.

For example, If the user was in rural areas or in dead spots in major cities like San Francisco or New York City, where there is no signal? What will owners of this new phone do about in-flight movie watching? The answer in both cases is they won’t be able to rely on this new iPhone and MobileMe combination.

Who would be a good candidate for such an iPhone without local storage? Only those who have constant access to either 3G or Wi-Fi. The option might also be for people who have an iPad or some other tablet. These people might not need the full iOS experience on their phone, but would like to have it available at times. They can see running a few apps, but never needing their multimedia content on their phone.

Apple could build in some apps for things like keeping a calendar, contacts, To-Do lists, and navigation. But to use the other apps they would turn to their iPad or Android tablet. However, in that case, why even bother with an iPhone when a Blackberry handles such things? The answer is some people will buy it just because it is an Apple device and they can get this streaming content when a good connection is present.

Another question this kind of streaming only iPhone raises is the issue of bandwidth caps. People who can only download 5GB of data could use that up quickly streaming it to their iPhone Nano. Will AT&T or Verizon change the way they limit how many bits a person can download in a month? That is unlikely since the carriers are already going in the opposite direction.