The common wisdom says there will be a mass exodus to Verizon after February 10 when the iPhone 4 finally becomes available on the carrier. A survey by ChangeWave Research says that as many as 41 percent of AT&T customers with an iPhone that will actually make the switch, according to MacRumors.

ChangeWave is a market research firm and they surveyed “professional and early-adopter consumers” at the end of last year, before the actual announcement of the Verizon iPhone. 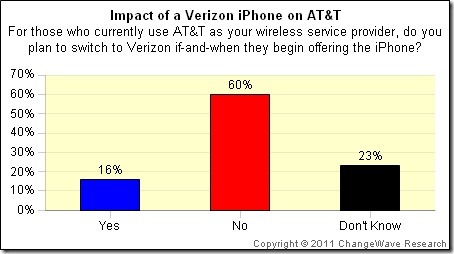 When looking at the number of all AT&T customers the percentage drops to only 15%. This was a spike in the numbers compared to previous surveys, which put the number at only 10% who planned to switch away  from AT&T in the next quarter for any reason.

The numbers get scary for AT&T when you factor in contract terms. The 41% is of those who plan to switch within the first three months after Verizon offers the iPhone. Only 26% of iPhone owners said they would switch away from AT&T within the next three months, but that survey was taken when a Verizon iPhone was only speculation. Now that it is a reality, the 41% is much more pertinent. Additionally, 31% of iPhone owners who have to wait up to a year for their AT&T contract to expire said they would switch.

Keep in mind this survey was of tech-savvy users, not the average AT&T customer so it’s isn’t representative of the customer base as a whole. Also, now that the Verizon iPhone is real, and not a rumor, the numbers could move either way as customers get familiar with the idea.