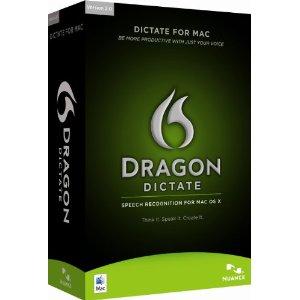 Dragon NaturallySpeaking and Dragon Dictate 2.0 make it easy and affordable to turn your talking into text on your computer. You can even control the computer with your voice, allowing you to essentially type faster and do more.

Dragon, the makers of Dictate 2.0 for Mac and NaturallySpeaking for Windows have teamed up with Notebooks.com to bring the joy of talking to your computer to our readers with a CES 2011 giveaway.

Both Dictate 2.0 and NaturallySpeaking Premium 11 for Windows allow you to talk at normal speed and type on your computer which wil save you time and give your fingers a rest when you have a lot of work to do. Dragon speech to text products are used by journalists, business professionals and students to talk to control their computers.

The Dragon contest has come to a close and the following winners were selected from Twitter and from the comments below.

To win a copy of Dragon Dictate 2.0 or NatuarallySpeaking Premium 11 for Windows all you need to do is follow @NotebooksCom on Twitter and Tweet the following,

For Naturally Speaking for Windows – “I Can’t wait to Talk to Tweet and Type with Dragon NaturallySpeaking in @NotebooksCom #CES2011 #DragonContest https://notebooks.com/go/af9”

For a Another Chance Leave A Comment – Leave a comment below telling us how you would use Dragon Dictate 2.0 or Dragon NaturallySpeaking.

The contest will run until January 11th at 11:59 PM PST when we will choose four winners using Random.org. Twitter winners must be following @Notebookscom to win as we will direct message you to confirm where to send your prize. One entry on Twitter and one entry in comments per user for a total fo two entries.