Black Friday: Amazon Pre-Black Friday Video Games on Sale Buy One Get One 40% Off

“For a limited time …” Amazon is selling video games for 40 percent off  if you buy another game.

A few of the choices are Call of Duty: Black Ops for both XBox and PlayStation 3, Madden NFL 11 on all three platforms, and Fallout: New Vegas. 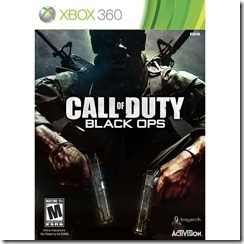 Other new titles include Battlefield Bad Company 2 Ultimate Edition, Fist of the North Star: Ken Rage, and others.

For some other Amazon Video Game deals check out the PS3 Greatest Hits and the Video Games Lightning Deals here. Right now they are offering Heavy Rain for PS3 for $34.99.

Here is the Call of Duty: Black Ops Trailer.