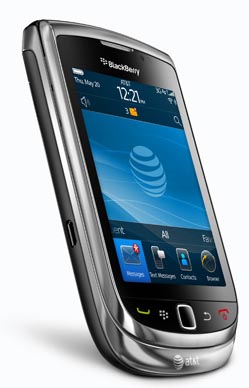 Like many other smartphones, the new  BlackBerry torch has a large touchscreen display. But in addition, it features a full  QWERTY slide out keyboard.  Many smartphone users prefer a physical keyboard, finding it easier to type long messages and  edit documents.  There is plenty of room for multimedia files thanks to 4 GB of built in memory  and a 4 GB microSD memory card.  with 8 GB of storage isn’t enough for you, you can always swap  out the 4 GB microSD  for a larger one (up to 32 GB).

Blackberry devices are often thought of as business devices, but the BlackBerry Torch 9800  has a lot of multimedia and social networking  features.  it has support for Facebook, twitter, MySpace and instant messaging. There is a new user interface for browsing and playing music and movies. In addition there is a dedicated YouTube app and Podcasts app.   there is also a new and improved web browser that supports multi-touch gestures.

If you’re currently  shopping for a BlackBerry,  you might want to wait until the BlackBerry Torch  hits store shelves so you can check it out.  Older models  run a relatively obsolete software.