Scrabble: iPad App of the Week

Scrabble for the iPad is a fun game that also demonstrates the innovative technique of connecting the iPad to other iOS devices for interactive game play and other tasks. That is why Scrabble is this week’s iPad App of the Week.

Scrabble is not a new game. It’s been around for years. But one of the problems with board games in general is set up and keeping track of pieces. Around our house we’ve had the rule that the losers have to clean up. But who wants to do that when you’ve just been beaten. That is why the iPad has the potential to make this kind of game very easy and even more enjoyable than traditional versions of the game. 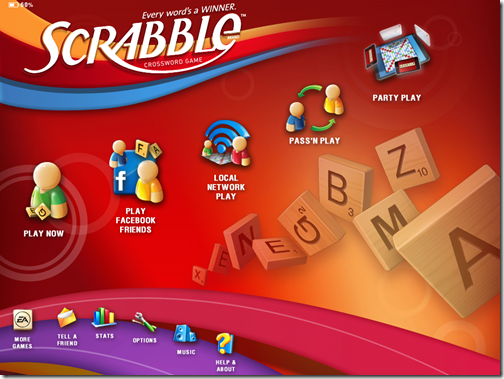 In Party Play, to connect the devices you have to turn off Wi-Fi and turn on Bluetooth on all of the devices. The connection can be problematic as the Bluetooth connections get dropped occasionally. If that happens, the game offers a way to reconnect without ending the game. If a person does finally have problems reconnecting they can be removed from the game while others continue playing.

The video below demonstrates the Party Play option of the game as my sons and I played a game one afternoon.

Party Play isn’t the only way to play. If you want to play alone, you can. 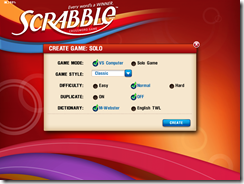 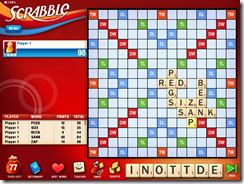 Playing a game by yourself has two options. You can play against the computer or entirely alone. You see from the left screen shot above that there are options for skill level or the dictionary you want to use.

During game play, your score is kept for you as well as the history of your words (see above right). The game has all the basic features of Scrabble as well as some unique options to keep it interesting. 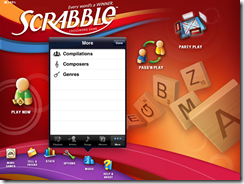 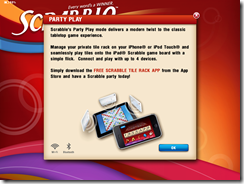 While playing you can listen to the included music, which is pretty lame. Or you can choose from your own music loaded on the iPad.

If you play the game in the most enjoyable mode, Party Play, you will need the Tile Rack app for the other iOS devices. It is a free download. Be careful that you don’t accidentally buy the version for the iPhone/Touch as it is another $3. 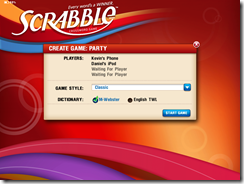 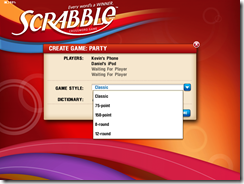 Once you get things set up as per the on-screen instructions (demonstrated in the video) you will see the above Create Game screen listing all the players who have connected with their iOS devices. You can then choose either a Classic game or one of the other options (see drop down list in the above right screen shot). 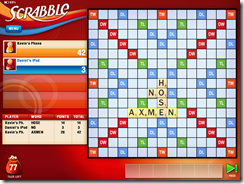 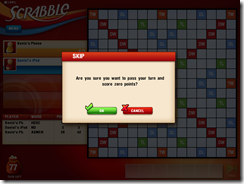 If you love Scrabble, then this is a real hit. It is an attractive game and works  well most of the time. The only frustration was the dropped connections. During the game my sons and I played together we lost a connection at least 4-6 times with our various iOS devices. We could not figure out if it was interference from another Wi-Fi device, which my oldest son was using while he waited for us to take our turns. Whatever the issue was, it was frustrating. But the game’s interface with the other devices is so unique that I still wanted to show it off this week.

I believe that there are going to be other games like this. Already, there is a great RISK knock off called Lux. 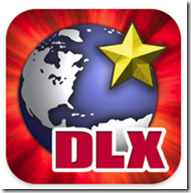 RISK is the game where you take turns attacking various countries represented by places on the game board. I would love to see that game implement with this feature. Another unique game like this is KL Dartboard.

It is not as good a game, but it is interesting. You use your iPhone to throw darks at the dartboard on your iPad.

I hope people find other creative implementations for the iPad in areas outside gaming. I wrote about this when the iPad first was released and proposed the use of this feature with education a teacher asking questions while his or her students answer them on their iPod Touches or iPads, all networked together in the classroom.