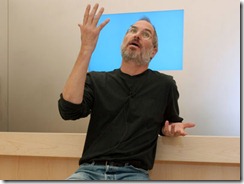 We brought you the iPhone 4 reception issue earlier. It seems that if you hold your iPhone 4 so that your hand is touching the band on the lower left corner of the phone, it will degrade signal strength to the point of even dropping the call and making it impossible to get a signal at all. The folks over at Gottabemobile confirmed this problem.

Well it seems there is a simple fix for the problem according to the head man at Apple, Steve Jobs. He was contacted about it via email and replied with one of his signature terse responses. His response reminds me of the old joke. A man says to the doctor, It hurts when I do this!â€ The doctor says, Don’t do that.â€

Rory Sinclair posted to his Posterous account the following interaction with Jobs:

So, um, just got my iPhone 4. It’s lovely and all, but this ‘bridge the two antennae to kill your reception’ thing seems to be a bit serious. If I bridge them with my hand or with a piece of metal the bars slowly drop to ‘Searching…’ and then ‘No Service’.

It’s kind of a worry. Is it possible this is a design flaw?

The man didn’t stop there. He went back at Steve saying there are not usually specs on how to hold a phone to keep it from dropping calls. But Jobs came back at him saying that wasn’t so citing many cell phone companies that give users a warning in the box saying not to touch the antenna during calls.

So, just don’t do that! That’s the official Apple reply. Oh and he also suggested that one might want to get one of the many cases available like the Bumper case?

To be honest when I first heard about this issue, I thought it was unforgivable for Apple to let the phone out with such a problem. But now that I hear this explanation it is somewhat plausible. The flaw was in the placement of this spot since many will be holding their phone with their hand on the lower corner if they are holding in the left hand and manipulating it with their right hand, as right handed people usually do.

If that’s the official fix for iPhone 4 reception issues, somebody better let Apple’s PS team know so they can fix the iPhone 4 commercial which has the phone being held in the left hand making contact at the critical juncture point. Here’s a collection of Apple commercial images with people holding the iPhone the “wrong way”, and the video is below.