I didn’t get an iPhone 4 preordered with Apple. The reservation I made at the Best Buy in my area fell through since they claim they only got 2 of the 32GB iPhone 4 models. So I gave up all hope of getting an iPhone 4 on launch day.

Today I was driving to Greensboro to pick up my son and I heard that some Apple Stores still had the iPhone 4 available. On a lark I went to the Apple Store in Greensboro, NC to see if I could get lucky and get one on launch day. I found two lines; one for those who had preordered which still had about 50 people in it 4 hours after the store opened and another for people who didn’t reserve an iPhone 4 which was a little bit longer. 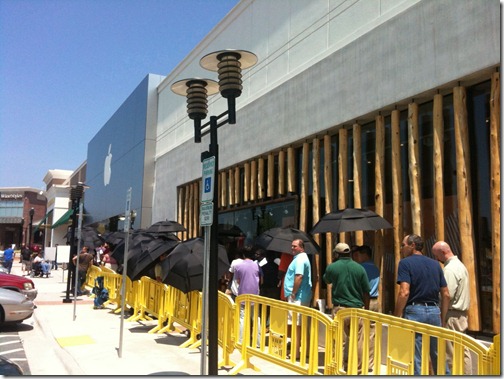 I got in the line and they had some yellow crowd control barriers up to keep us in line.â€ The Apple staff passed out water which many drank down and left there on the side. If they hadn’t regularly been cleaning up I am sure it would have been a real mess. The also gave some umbrellas to ward off the hot sun. It was well over 90 degrees. Not sure what the temperature was on that hot pavement. 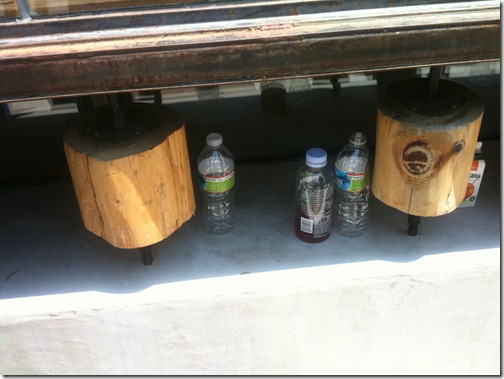 Sadly, our faith in their humanity was dashed. About thirty minutes later, we were told specifically that there were no more phones to be sold today. The only reason we got that information was a belligerent customer who had been waiting since 5:00 am got quite loud and angry. To appease him the store manager came out and finally gave us the bad new. He said all he could do was put our name on a list.â€ Thinking a person with a legal pad, or at least some person with an iPod Touch, would be coming in the next few minutes to get our names, we waited. We waited another 15 minutes when another employee came out to pick up empty water bottles. She told the lady three people in front of me that there was still a chance to get a 32 GB iPhone 4, so I kept waiting.

It was a total of 90 minutes from arrival before I finally got in the door. Handing off my umbrella, I was taken to an iMac where I simply was told to log into my Apple iTunes account and click a reserve button. The nice clerk said it would hopefully be tomorrow.â€ After all the misinformation we were given, I’m not going to hold my breath. But they belief is that some of the phones reserved will be made available after people don’t pick them up on the 24th. They will make them available some time on the 25th to those of us who got on the listâ€ at that store. Of course to get it I will have to drive back to Greensboro, a two hour trip.

Mine was not the only bad experience. I know of at least one person who wanted to get an iPhone at a WalMart and found they had only one in stock. I called the local WalMart and they didn’t even get that many. Same for Radio Shack and even AT&T. After not getting rewarded by my reservationâ€ at a Best Buy, I got an email today from them asking me to buy one online. Of course they are sold out. Someone shouldn’t have hit send with that one. I guess Apple decided to keep a larger supply of the products this time around.

All of this taught me a few things: