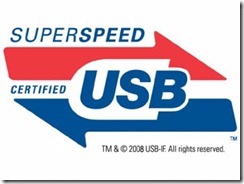 USB or Universal Serial Bus is the standard for connecting most external peripherals to computers and even some internal ones as well. It was originally invented  by an Intel employee in the 1990s. At first it competed with Firewire, but has usurped its competitor as the primary method of connecting peripherals to PCs. While there are still a number of Firewire based devices, the primary competitor for USB moving forward is eSATA. But USB is king. Lately we’ve been hearing about a new USB standard called USB 3.0 or SuperSpeed USB. The question is do we really need another USB standard?

Already companies are moving forward with the faster USB connection. Laptop Magazine just did a comparison of USB 3.0 external hard drives. They gave the nod to the Iomega eGo Portable Hard Drive because of its speed, durability, aesthetics and value. 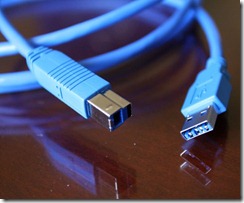 On the notebook side, most of the major manufacturers are beginning to put USB 3.0 ports into their computers.

So, should it affect your purchasing decision? Is it worth it to pay more for a PC with one of the new ports even? Should a buyer exclude a notebook from their shopping list just because it lacks USB 3.0? The best way to answer that question is to let you know what you get with USB 3.0.

Below is a demonstration of the difference between USB 2 and USB 3 at the Gigabyte HQ in Taiwan as recorded by TweakTown.

First, the biggest benefit of USB 3.0 is speed! They don’t call it SuperSpeedâ€ for nothing. Currently USB 2.0 has a maximum throughput of 480 mega bits per second (Mbps). USB1.1 was 12Mbps. USB 3.0 will be much faster at up to 4.8 gigabits per second (Gbps). That means USB 3.0 is theoretically ten times faster than USB 2 and 40 times faster  than USB 1.1. But in real world tests it doesn’t get close to that speed differential. 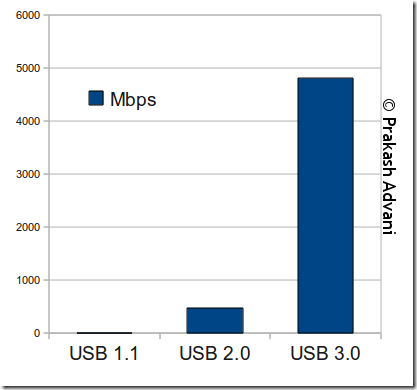 You might think that the 480Mbps is fine for most tasks. You would be right. But realize that these numbers are the theoretical maximums. The real world experience was nowhere near this fast. The speed of USB connections is much like your internet connection; while it may be advertised at a really high speed — when you use it you will often be surfing at a lower speed, even while downloading big files.

The USB standards are similar. They never really reach top speed nor would they be able to maintain that speed if in perfect conditions they could. So raising the ceiling makes the averages go up. If the maximum is 480 Mbps then the average may be in the 300s. But raise the ceiling to ten times that and maybe the averages will be ten times faster too. With hard drives now over 2 terabytes, it takes a long time to back up. With USB3 it will now be potentially ten times faster. HD video will transfer faster too from your digital camera. The point is the  need is now here for a much faster transfer rate.

With more power, comes a need for a bigger pipe. So, you have to understand that the connector for a USB3 device is going to be different. You may be saying, Great! Another USB connector! We already have the standard USB and mini and micro USB. There are also some manufacturers who have proprietary USB connectors. Why do we have to have another one?â€ The answer is two words – bandwidth and power. The old USB connectors had four wires in them and data flowed in only one direction at a time. The new connector will have eight wires and the data can flow both ways at the same time. There is also more electricity coming over the cable. Gone are the days of an extra USB plug to power something like an external hard drive. That leads us to another difference.

Power over the cable will behave differently. You won’t have to have two cables to power your external hard drive because there is enough power over a single USB3 cable. That means that some devices will be able to run without a power brick connected to the wall. Also, if you charge your device via the USB port, devices taking advantage of the new spec could charge faster. But it’s not all about extra power.

One of the problems with USB devices is they drain your notebook’s battery faster. If you are using the device, you are willing to accept the tradeoff. But what if you quit using it and forget to unplug? With USB3 there is a spec that says the PC should lower the power going over the connector to the device to a trickle if it is not needed anymore.

Sadly, one drawback of the new power specs is cable length. Currently you can run cables longer than 3 meters without a power boost. With USB3, due to the power and signal quality requirements, if you go over the 3 meter length you will likely have to boost the signal and power with a booster device of some kind. You will likely see hubs advertised as having this capability in them. But that will likely mean that the hub will have to have power brick to connect to the wall outlet eliminating one of the benefits of USB3 for long cable runs. Most of the time this won’t be an issue. But on occasion it will in very limited circumstances.

The good news is that if your new notebook has a USB3 port,  your older USB devices will still work. Even though the new spec requires a different kind of cable, the designers made sure that old cable connectors still fit and functioned as before.

If you really want to take advantage of USB3 now, you will need to start looking for both a computer with USB3 built in or some kind of add-in device. As we said above most of the notebook manufacturers are beginning to put USB3 in their newer models. Soon, it is possible that this is all you will see. As for peripherals look for hard drives and solid state drives to be some of the first available. Already you can find them if you look around a bit. One of the very interesting implementations is DisplayLink’s USB 3 to HDMI adapter.  This means it that one day we could see displays that connect via USB3 instead of the current video connectors.

USB3 is a great step forward for bandwidth and power consumption in peripherals. Adoption can’t be too fast in my opinion. And I will be looking for USB3 in my next notebook computer purchase.

USB TImeline by Everything USB