Review of the Ipevo TR-10 Speakerphone for Skype & iChat

Some time ago I shared my initial impressions of a company I first met at Macworld by the name of Ipevo. Since then I have had the opportunity to test out their TR-10 speakerphone. If you visit Ipevo’s website you will see that they have a TR-10 and a TR-10i speakerphone, one focused on Skype and the other for iChat. The device makes a handful of things easier than using your internal microphone on your laptop. Although the only difference I see between the two models (besides the color) is whether you want to use it for Skype calls or iChat voice conversations.  I’ll share a little secret with you, long as you download the two separate “Control Center” applications from the Ipevo web site you can actually use either model for both Skype and iChat. No need to fuss over which one.

In any case, I use both Skype and iChat on a daily basis for voice conversations with clients, friends, and others I work with. In the past I relied on either my computer’s built in microphone or on my combination headphone/mic usually used for my iPhone.

The TR-10 is perfectly shaped to plug into an available usb port and place right next to you on your desk or coffee table. Do you find yourself using Skype or iChat for group conference calls, huddling around a single computer trying to understand what’s being said by the people on the other side? Just get one of these puppies and place it in the middle of the huddle. The TR-10 is pretty loud and does a good job of making sure your voice is heard by those listening to you one the other line.

The TR-10 has two modes that can be changed by the flip of a switch on the side of the device. One is the previously mentioned speakerphone mode. The other allows you to pick up the TR-10 and put it to your ear like a corded phone. If this is the feature that makes you want to purchase the TR-10, I suggest you pass on it and check out one of iPevo’s handheld Skype phones. The shape of the TR-10, position of the cord, and little rubber feet used when laying flat in speakerphone mode make it feel awkward and sometimes uncomfortable when held to your ear. Keep it placed on the table and your golden. 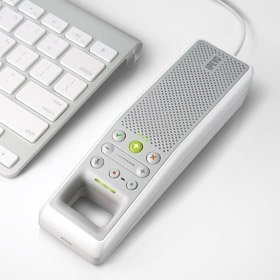 A couple other notable features of the TR-10 make it more than just a speaker and microphone. The device itself sports a series of buttons to control your conversation. You can initiate conversations with the push of a button, control the volume, mute, and even record conversations using the Ipevo Control Center application. These all come in handy when you have your laptop placed across the table and you need to place someone on hold or record something to review later.

One thing to be aware of when using the TR-10, you must have the Control Center software running in order to use the device. On multiple occasions I started conversations with people on Skype only to find myself fumbling to get the Control Center application started while the person on the line wonders what’s wrong with their connection. Even worse, do not run the iChat and Skype versions (remember, there are two versions) at the same time. You and the person on the call will hear a very annoying echo due to both applications broadcasting the conversation.