It Is Time to Give Mark Zuckerberg a Break

It’s old news. Mark Zuckerberg was interviewed at the All Things Digital conference by Walt Mossberg and Kara Swisher. While I think they pulled their punches and didn’t really go after Steve Jobs or 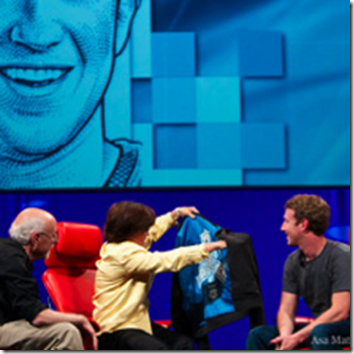 Steve Ballmer and Ray Ozzie; with Zuckerberg they didn’t hold back.

They made him sweat, both figuratively and literally, to the point where he took off his now somewhat signature hoodie. This was not until after he said he never takes it off. He did.

Before the interview and in light of all the privacy concerns we in the technology press and blogworld have been extremely critical of Zuckerberg and Facebook. I put myself in that list of those who were critical.

It is time to give the kid a break. I finally got around to watching the full interview (see it below). About a third of the way into the interview Zuckerberg was sweating profusely. Mercifully his interviewers suggested he remove the hoodie, a thick hooded sweatshirt that was not the right thing to wear under hot stage lights. He was clearly rattled by some of the questions.

The interview, and hoodie, quickly became the subject of Tweets, blog posts, and was even discussed on This Week In Tech by Leo LaPorte and friends. Jason Calacanis was merciless in his criticism, but then again he seems to have a vendetta against Zuckerberg. The last few weeks have been like blood released among the sharks. Everyone pounced. One of the audience members who questioned him after the interview wanted know if he really had thought that Facebook is now one of the five most powerful tech companies along with the likes of Apple, Microsoft, Amazon and Yahoo. Kara Swisher commented about the poignancy of the questions. Zuckerberg had no really good answer and it seemed like he hadn’t really thought about it. I think I’m in denial.â€, was all Zuckerberg could muster.

I understand the rationale behind the tough questioning and the critical nature of the coverage. I contributed to it. But maybe we need to give him a break.

Yes, Facebook has been playing a little fast and loose with privacy. But while I believed the company was trying to cash in on our private data, the truth is the vast majority of people don’t really care. Those of us who do can jump ship anytime. While they don’t make it easy, the do make it possible to get off the Facebook train. However, my view has changed somewhat after watching Zuckerberg for over an hour. I believe that this is a kid who has stepped into a role that would cause most forty to fifty year old seasoned business men to stumble. Some really experienced business men have failed to run companies with less influence and Internet power than Facebook. He put together a great service that millions of people love and use many times every day. That doesn’t mean he should get a pass and be allowed to break that vaunted Google mantra, Don’t do evil!â€ But he seems like a very bright guy and while very young I believe, with some experience, he will learn a few things.

First, I think he will learn that his customers’ concerns are important. He understands what they care about more than most of us. The failure of Quit Facebook Day proves that. These privacy concerns have been publicized in enough places, including mainstream outlets like the Big Three networks, the three largest cable news networks, and many local papers via the New York Times syndication network. Plenty of Facebook users know the concerns exist. They just don’t really care. Only 35,561 people quit that day. Facebook adds more than that in a day every day!

Second, I also believe that he will learn to act more quickly. It is ironic that someone so successful in harnessing the power of the instantaneous Internet failed to understand how fast the snowball rolls down the mountain of public opinion on the same Internet.

Finally, I also believe he will learn how to handle big-time interviews like the D8 conference. He’s just not that good in front of people. He’s a programmer not a public speaker. But with experience he will learn that hot stage lights make nervous people sweat.

I’m not saying that we should start looking the other way and not keep pressure on to ensure that Facebook maintains a minimum level of privacy. But we should save our criticism for Zuckerberg’s business practices and not about the man himself. So he sweats. I sweat a lot too when I get in front of crowds. I do that every Sunday!