Apple officially introduced the iPhone 4, its fourth generation iPhone today at WWDC in San Francisco. The iPhone 4 has an an all-new design and 100 new features. The iPhone 4 is 25% thinner than the iPhone 3GS, making it the thinnest smarphone according to Apple CEO Steve Jobs.

Steve Jobs took the stage for well over 90 minutes to discuss the iPad, iPhone applications and iPhone 3.

The iPhone 4 will initially be available in the United States, France, Germany, U.K. and Japan. It will be available in 18 additional countries in July and 24 more in August.

Apple and AT&T will begin taking pre-orders on June 15.

The iPhone 4 will have dual cameras. The primary camera is on the back of the camera and is capable of taking 5MP still images and HD video. The iPhone will feature an LED flash for the first time, making it possible to take images in dim rooms for the first time.

The camera ont he front of the phone can be used to snap pictures of yourself or for video chat. The new video chat application is called FaceTime. The video calling service works between iPhone 4 users.  FaceTime is a WiFi only feature until at least next year, which means you can’t make video calls on the go.

There are four times the number of pixles in the iPhone 4 display compare to previous models.The 3.5″ display has 960×640 pixels, a 800:1 contrast ratio and IPS technology for a wider viewing angle. This means text will be much sharper. The iPhone 4’s display packs 326 pixels per inch. According to Steve Jobs, 300 pixels per inch is the limit of what the human retina can decipher at approximately 10-12 inches away. The high resolution display will make it easier to read small text and make curves in graphics appear smoother.

iPhone tethering- In many countries, iPhone 3G and iPhone 3GS owners have long been able to connect their phones to their laptops to get online while on the go. This feature is finally coming to U.S. iPhone owners. This is a feature enabled in software and does not require the purchase of a new iPhone (explain upgrade).

Apple’s new A4 processor is speedier than its predecessor and more energy efficient. The new processor will allow the phone to deal with multimedia apps, such as iMovie for iPhone. The iPhone 4’s new processor should make it as snappy as the recently introduced iPad. The iPad is significantly faster than the iPhone 3GS.

The iPhone 4 has a larger battery that will help it last significantly longer than the one found in previous iPhones. According to Apple, the iPhone 4 users can talk up to 40% longer on a single charge compared to the iPhone 3GS.

The iPhone 4 is rated to provide the following on a single charge:

The new iPhone 4 is the first iPhone to feature a gyroscope. This feature will improve the accuracy of applications that rely on direction, movement and location. Previous iPhones included an accelerometer that allowed for automatic screen rotation and relatively simple movements in games and apps.

There are a total of  five sensors  that allow the iPhone 4 to sense its environment including a Gyrosocope, accelerometer, compass proximity sensor and ambient light sensor. 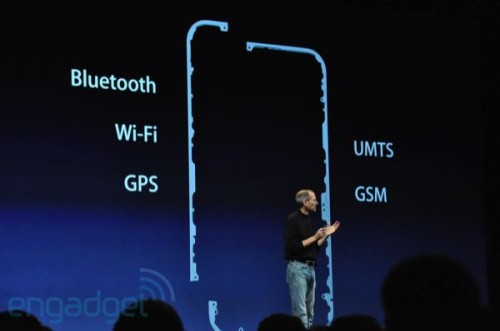 Stainless steel band runs across the side of the phone. The integrated antennae are designed to improve Bluetooth, Wi-Fi, GPS, UMTS and GSM signals. Combined with AT&T’s ongoing network improvements, this should reduce the number of dropped calls and network time outs.

Microsoft’s Bing search is now available on the iPhone. Google will still be the default search provider, but users may select Bing search. This is the first time Apple’s offered more than one search solution on the iPhone.

The iPhone 4 will utilize a micro SIM card, which is much smaller than the one found in the previous iPhone models and most smartphones. It is the same size as the one found in the iPad 3G. This will likely reduce the number of people using iPhone on non-authorized networks, such as T-Mobile in the U.S.

Apple’s posted a promo video on Apple.com that shows several of the features announced at WWDC.