There are more pictures of the new iPhone from apple.pro which nearly everyone expects to be launched at WWDC on June 7th. This time the photos show the new model in both black and white bodies.

What is interesting about them is not the color we’ve seen white on the iPhone for a while. It is the fact that Apple seams to be leaking like an old dingy lately. Previous iPhone announcements (and other Apple hardware) have been locked down tight. But there will be little surprise about the looks of the new iPhone, unless Steve Jobs surprises us all by not announcing any new hardware or it looks totally different than the three different leaks we’ve seen so far. That would be shocking. 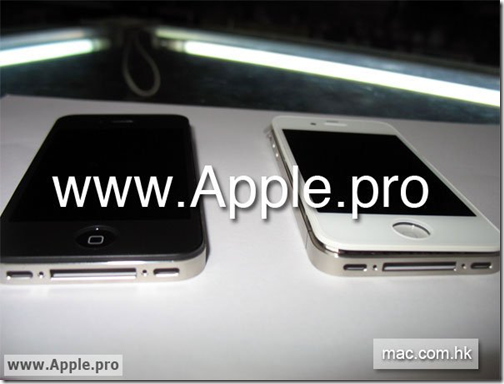 Recently Steve Jobs was asked if his WWDC keynote would answer some of the jabs taken by Google at their developer’s conference. He responded with a terse You won’t be disappointed.â€ That is if you can believe the report from Bryan Webster at MacRumors. Let’s hope Jobs is going to announce much more than a pretty white case.

The Jobs keynote will be Monday, June 7th at 10:00 am Pacific. It will surely have some interesting revelations. But what might they be, besides a new iPhone?