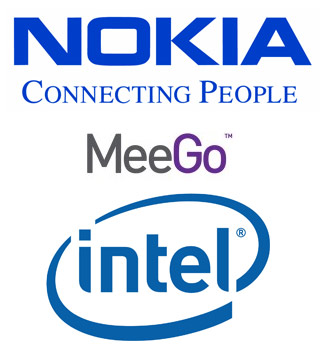 MeeGo, is intended to run on various platforms, such as smartphones, tablets, netbooks or in-car entertainment systems. The Linux Foundation will be the one to host the new MeeGo and dedicated applications will be available through the Nokia Ovi Store and Intel AppUp Center.

I’m sure you’ve heard the news: Moblin and maemo are merging! We are taking the best pieces from these two open source projects and are creating the MeeGo software platform. Both teams have worked for a long time to support the needs of the mobile user experience – and MeeGo will make this even better. We want it to be fun, focused, flexible, technically challenging and ultimately, something that can change the world.

We all use mobile devices every day. The power and capability of handhelds has reached astounding levels – netbooks have been a runaway success – and connected TVs, tablets, in-vehicle infotainment, and media phones are fast growing new markets for devices with unheard of performance. Our goal is to develop the best software to go with those devices. The teams behind maemo and Moblin have plenty of experience and even more ideas on how to make things better – and together we will create something special.

The MeeGo website is still evolving – you’ll run into a few “coming soon” pages as we pull all the content together and get things ready for our first project release in the second quarter. But there’s already a lot to see – and a community to join! Please take a look – and come back often as we approach that first release.

We really want to hear from you. Be in on IRC, on our developer mailing list, or through bugzilla. MeeGo is an open project and it will be successful through its developer community. It’s my personal goal to make sure that we can all together be successful. And have fun.

(and now also co-chair of the MeeGo steering group)

Also, the folks from MeetMobility had an interview at MWC with Intel’s Scott Apeland to talk about MeeGo.  It will be interesting to see if the combined effort of Intel and Nokia can make something special for a new Linux based OS for notebooks as well as other plaforms—