MacUpdate Bundle is a Great Deal for $49.99 with VMWare Fusion

The MacUpdate Bundle puts a number of programs together into a bundled software collection for a deeply discounted price. The current MacUpdate Bundle includes some really great tools, utilities, and a game for only $49.99. Get it soon though because it expires on March 28.

In this current bundle you get $378 worth of software. If you don’t mind letting people know about the bundle on Facebook or Twitter, then you will get another program as well.

Here’s what you get in the bundle with the retail price in parenthesis after the description. 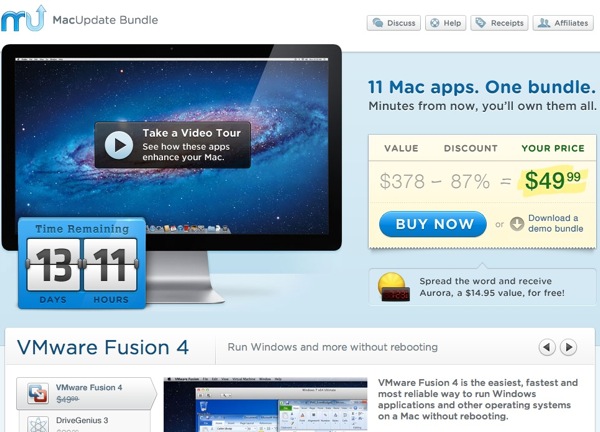 The bonus app is Aurora and you get this $4.95 clock app for Tweeting about the bundle or liking it on Facebook.

If all you wanted was VMware and one of the tools like PDFpen, then it make the bundle worth it. You could get the light version of Drive Genius in the Mac App Store but it costs $59.99. PDFpen is also in the app store but the cheaper version costs $59.99 and the expensive one costs $99.99. Other apps in the Mac App Store include DesktopShelves, Snapheal, Boom, and Worms. I’d recommend getting it, especially if you need or just want one of the tools.